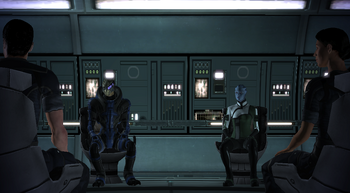 Mass Effect Wiki (or MEWiki for short) is an encyclopaedia focusing on the Mass Effect games and novels. We cover characters, planets, weapon and armour stats, assignments, storylines, technology and pretty much anything else that comes up.

However, MEWiki is primarily an information resource, not a forum. For lengthy discussion of plot points, technology or characters, or to post speculation, please visit the official BioWare forums.

Anyone is welcome to edit an article--if you see mistakes, please correct them! : ) The more editors we have, the stronger the wiki becomes.

MEWiki currently has four active admins: SpartHawg948, Tullis, DRY, and Lancer1289. If you need help, have a question, want to report a problem or leave a suggestion, please leave a message on our talk pages.

Check out the Mass Effect Wiki: Manual of Style. The Style Guide also contains references for technical information, like how to create links, insert pictures, and categorise your article. If you get stuck, ask an admin for help by posting on their Talk page.

Check the article's page history for a summary of why your edit was changed. Edits may be reverted if they contain unsubstantiated speculation, poor spelling or grammar, or make changes such as converting alien races to upper case.

Report it to an admin. The action taken will depend on the circumstances involved, but the offender will usually get a warning and possibly a ban. See the Code of Conduct below.

In the Mass Effect universe, alien races are common nouns (geth instead of Geth, asari instead of Asari, etc) presumably to bring them in line with the real life grammar for "human". See the Style Guide for more.

In almost all cases the answer will be "thank you, but no." Currently, MEWiki only accepts videos in very rare cases, normally only officially released videos, and definitely not leaked footage.

There are two reasons for this: one, it is a thorny copyright issue, and two, it falls under not depicting Commander Shepard on the wiki to keep it universal (see Style Guide: Canon). If you want to link to a video to prove an edit is not speculation, add a link at the bottom of the article, but any video uploaded to the site will be deleted.

Offensive language, either toward other editors or in articles, is not tolerated. There is some leeway in Talk pages and in discussion between users, but inserting offensive language in articles is considered vandalism. When deciding how to respond to an editor’s comments, consider how you would speak to a stranger face-to-face in public, as that is effectively what you are doing. If you find offensive language in an article, please correct or report it. Repeat offenders will be warned, then banned (see below).

Each article's Talk page exists to:

Talk pages are generally not edited by administrators unless the discussion gets wildly out of hand. Editing other users' comments is not acceptable (see below).

Talk pages are not:

A user's page and Talk page belong to that user, and they have control over what goes on it. Direct communication with a user should be done by leaving a message on their Talk page.

Commenting on other users[]

Commenting on another user’s edits should be done on that article's Talk page or on the user’s talk page. If you disagree with a user’s edits, particularly if they are major edits, discuss them with the user and use basic courtesy. “Editing wars” without any discussion between both parties should be discouraged. Even if you disagree with someone, there is no need to be impolite. Discuss it first; they may have misunderstood your point of view.

If you are an experienced Wikia user, please check before implementing policies from other wikis. For example, some wikis use user-written guides signed by that user, e.g. “Vanguard Guide by Tullis”, but MEWiki does not. As with any other new community, lurk and take some time to familiarise yourself with the community before making or proposing substantial changes.

Banning a user happens under two circumstances. A roaming user who commits a major act of vandalism but is not a contributor will have their IP address blocked for a short period of time to discourage a vandalism spree. However a regular contributor will be banned if circumstances demand it. Examples of behaviour leading to a ban include:

First offences do not normally lead to a ban, but an offender will be warned. Repeat offenders who refuse to listen to warnings will be banned. This may be anywhere from two weeks to six months depending on the offence. If the offences continue after the ban expires, the user will be permanently banned.

In some circumstances, a particularly severe first offence (e.g. racist or otherwise prejudiced language, deleting large swathes of the wiki, severe vandalism that takes a long time to correct or that damages the wiki) will lead to a permanent ban without a warning.

...the code of conduct boils down to “courtesy toward other users, the community and the wiki itself”.

MEWiki has a “low tolerance policy” on speculation in articles. This is due to an incident when an editor created a new race and star systems, and began incorporating them into articles as fact. As the PC version had recently been released, this confused several contributors as to whether a new race had been added in the PC version. Finding and rooting out these edits created problems, and so this policy was introduced.

Speculation is permitted in articles under the following circumstances:

Incorrect: “Quarians once had fur, but after wearing environmental suits for hundreds of years this trait has died out.”
Correct: “Some speculate that if they join the Council, humans will have a major military role because they have a substantial fleet, well-trained army and adaptable military doctrine (see Systems Alliance).”

If you see an unsourced piece of information that may be speculative, but do not want to delete it, the {{fact}} tag can be used to alert other users that this is unconfirmed and request supporting links.

Example: "This decision is pivotal to the story. Šablona:Fact "

If speculation is not substantiated or qualified, it will be removed.

Vandalism is any unwanted or inappropriate editing to existing articles. Examples of vandalism include:

Most vandalism is committed by users outside the community or roaming Wikia users. It should be corrected as soon as it is committed or reported to an admin.

Because some articles will require deletion, moving, merging, splitting, and or redirecting, when a action like this is proposed, add the appropriate template, {{Delete}}, {{Move}}, {{Merge}}, {{Split}}, or {{Redirect}} and start a new section on the article's talk page with the headline (action) Proposal. Do not just add the template and leave it, please open a discussion so the action can be addressed.

A few simple guidelines for the discussion about the action:

Because talk page will get long over time, archiving them will become necessary. There are a few guidelines when it comes to archiving talk pages and the archives themselves.

Note: These terms will not apply to individual user’s talk pages. Users are free to archive their own pages as they please.