The A-61 Mantis Gunship is a vehicle that appears in Mass Effect 2 and Mass Effect 3. Since its introduction, the Mantis has become a staple of military forces across the galaxy.

The Gunship is driven by vectored-thrust engines. First rolled off the assembly lines in 2170, the Mantis remains in service in dozens of armies across the galaxy. Its modular construction means that the versatile Mantis can be reconfigured as a low-altitude gunship, a fighter, a high-altitude bomber, or even a single-stage-to-orbit spaceplane that can engage enemy craft around a planet or a space station. The only role the Mantis cannot perform is that of a true deep-space fighter, as it has no FTL drive.

The Mantis houses an element zero core which lightens the engines with a mass effect field, allowing it to take off vertically and hover in place using minimum fuel. This also gives it far greater range and speed than the helicopters and jump-jet aircraft that once filled its niche.

Standard defenses include heavy armor plating and kinetic barriers, though the latter are often removed by mercenary groups. It also houses a thermal decay system and an electronic countermeasures suite which help it to nullify surface-to-air attacks.

In Mass Effect 2, A-61 Mantis Gunships are occasionally used by mercenary groups and criminals to attack Commander Shepard.

As the Mantis is a highly modular craft, it can carry a number of weapons load-outs. When used in ground-attack roles it is most commonly armed with two sets of two forward-facing missile bays over each wing, normally armed with Inferno PKRs (Precision Kill Rockets), and a pair of belly-mounted M350 mass-accelerator autocannons.

The Mantis is equipped with heavy armor. The one used by Donovan Hock also employs military-issue kinetic barriers, giving it durability on par with a Geth Colossus.

The A-61 Mantis has the capacity to carry and deploy several armed personnel or FENRIS Mechs. 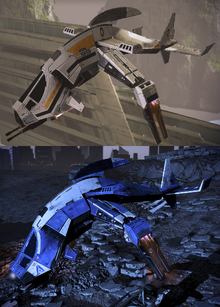 Retrieved from "https://masseffect.fandom.com/wiki/A-61_Mantis_Gunship?oldid=514019"
Community content is available under CC-BY-SA unless otherwise noted.