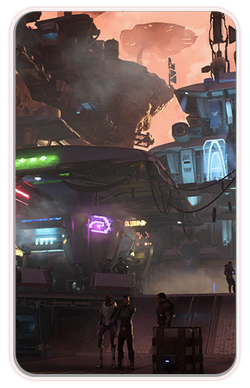 A string of violent murders plague Kadara Port. Reyes Vidal believes the Roekaar are the culprits. He has recruited you to investigate the murders and prove his theory correct.

Started automatically after the initial investigation in the aforementioned mission.

Vidal has given Pathfinder Ryder the navpoint

for another murder victim.

The crime scene is in one of the houses at Charybdis Point on Kadara. Upon entering the building, Vidal calls on the comm, giving info on the murder victim.

Scan all clues in the crime scene[edit | edit source]

The clues give support for Vidal's theory about the Roekaar being the murderers. You have to scan all of the following items:

There are also two datapads that you can read, but they're not required to complete the objective.

Head to the navpoint at the hideout

. Reyes is not at the hideout. The Pathfinder team is captured by the Roekaar, and their leader Farah Noskos is indeed the culprit behind the murders. Reyes appears and delivers a surprise to the Roekaar.

After defeating the Roekaar, you can explore the cave. There are a number of branching tunnels with mineral nodes and lootable containers. There is also a container near the exit door.

A datapad reveals that Vidal was right: the Roekaar came here to get more recruits and started killing aliens and angara friendly to the aliens.

Outside, Reyes pledges to let all the important people know about the good you did.

Retrieved from "https://masseffect.fandom.com/wiki/A_People_Divided?oldid=515547"
Community content is available under CC-BY-SA unless otherwise noted.