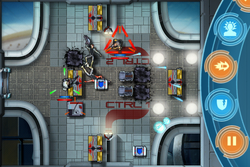 Jacob is able to use its abilities via the powers wheel present on the left side of the screen. Tap the ability button to launch your power to the targeted enemy. When a power has been used, he will be unavailable during a short period of time. You will have to wait during this cooldown before reusing your ability. The icons on the power wheel will appear in three different colors depending on the power's status :

Each of those three powers available for Jacob can be upgraded once. During the course of the game, Jacob will gain an ability upgrade after each major investigation mission. When a power is upgraded a little "+" will appear on the left side of the power's icon.

In addition to those powers, the power wheel can also be used to pause the game which will automatically recalibrate your iOS device's accelerometer when you un-pause the combat.

The biotic attack of Jacob is Stasis. This Biotic Statis freezes an adversary in place. They cannot move or fire while under the influence of this ability. While in stasis, Jacob can continue firing on an enemy, killing them with no resistance.

This power will be upgraded after the mission on Bekke causing the stasis to last longer.

The Heavy Weapon Attack causes Jacob to fire an exploding grenade in a straight line. It explodes upon impact with an object or enemy. Unlike firing the assault rifle which features lock on auto-targeting, firing the grenade requires more precision. This attack can make damage in a certain radius.

This power will be upgraded after the mission on Tortuga causing more explosive damage.

The tech power of Jacob is Shield Overload that can automatically discharges your targeted enemy's shields bar.

This power will be upgraded after the mission on Ahn'Kedar causing more of the enemy's shield to be depleted upon impact.