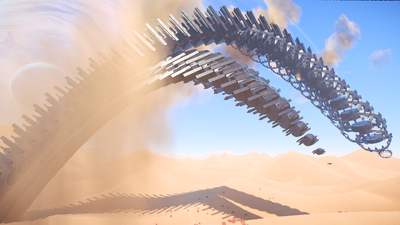 The Abyssal is a massive, worm-like Remnant construct that inhabits the deserts of Elaaden. The Abyssal is even larger than an Architect and can be seen and heard moving from as far away as New Tuchanka. It is non-hostile but also cannot be killed. The Abyssal's function as a Remnant machine is unknown.

The Abyssal can actually be seen as two distinct and separate units, one with red lighting and the other blue, jumping in tandem with each other. The red one is longer and larger than the blue one. Its passage across the sand creates an electrostatic charge that occasionally trails its body.

The construct can be seen patrolling the Sea of Ataraxia, north to northeast of New Tuchanka and around the northernmost monolith in the area. It moves in a set sequence of jumps, always emerging and hitting the ground in the same spots. Pathfinder Ryder can use this to get close to it, despite it moving faster than the ND1 Nomad. Several squad members voice their comments about the construct if near enough.

Several krogan colonists in New Tuchanka can be heard talking about "The Worm" and even ponder it as an alternative for a Thresher Maw in the Rite of Passage.