The Adhi is an Outlaw unit. While Wild Adhi are their undomesticated kin, these Adhi are outfitted with various cybernetics to enhance their abilities and/or bend them to their owners' will. They typically rush toward their targets' blind sides to lock them down with their powerful bite, preventing them from doing anything else until they shake it off.


ANALYSIS:
An over-sized, dog-like creature trained and used by outlaws to rush at enemies. 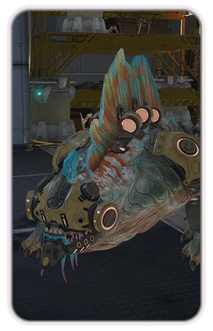 Adhi are four-legged lifeforms sighted on multiple worlds, across the Heleus Cluster, often foraging together in packs. They are extremely intelligent and capable of understanding complex commands. Wandering explorers and mercenaries are often accompanied by one or two trained adhi for defense.

When attacking, adhi drive opponents out of secure positions to make them vulnerable to gunfire or a concerted attack by the rest of the pack. Their jaw strength has been measured in excess of 1900 N, dangerous even when wearing a hardsuit. Adhi also show no fear of scout rovers.

Interestingly, the adhi genome shows signs of extensive genetic engineering that resembles the "uplifting" of some domestic animals on Earth before gene modification laws were put in place. These adaptions allow the adhi to survive in hazardous environments and may account for their almost tactical intelligence even in the wild.

Like Wraiths and Breachers, Adhi are used primarily to draw fire and flush players out of cover. The primary (and most dangerous) attack has these Adhi clamp their jaws around a player's right arm and drag them out into the open; besides leaving them vulnerable to enemy fire, it forces them into a button-mashing sequence to escape.

Alternatively, they can swipe with their front claws for light damage.

Adhi are unprotected by shields, armor, or barriers.

Retrieved from "https://masseffect.fandom.com/wiki/Adhi?oldid=516725"
Community content is available under CC-BY-SA unless otherwise noted.