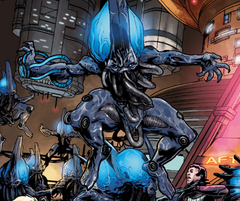 Adjutants are hostile husk-like creatures originating from beyond the Omega 4 Relay.

In 2186, a Cerberus transport ship returning from a trip to one of the organization's research bases beyond the Omega 4 Relay docks with Omega and releases dozens of Adjutants onto the station. The creatures proceed to attack everything in sight, and advance to the doorstep of the Afterlife Club, the seat of Aria T'Loak's rule over Omega.

It is later revealed that Cerberus had kept a colony of Adjutants within its research base at Avernus Station, but somehow they had broken free and were able to take control of the base's transport ships to escape. Although the first wave of attackers was stopped, more lurked on the other side of the Omega 4 Relay, learning to control the better-armed Cerberus ships. Aria and Cerberus general Oleg Petrovsky eventually arrive at Avernus Station and contain the Adjutants, but the damage has been done; the Adjutants' escape was orchestrated by the Illusive Man to distract Aria and allow Cerberus to conquer Omega. 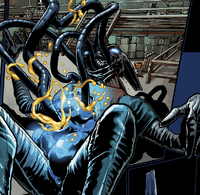 Adjutants have the apparent ability to "infect" other beings with their Reaper-originated technology, as seen when a salarian that was attacked by one of the creatures quickly transforms into a new Adjutant. When an Adjutant first transforms, however, it is significantly weaker and needs more time to rewrite the genetic code of its body. This is the ideal time to eliminate the transformed. The only way to stop the transformation from occurring appears to be to kill those who are "infected" or decapitate an infected corpse. The main goal of the Adjutants is to transform other life forms, and to that end they will try to avoid outright killing others since the dead are useless to them. 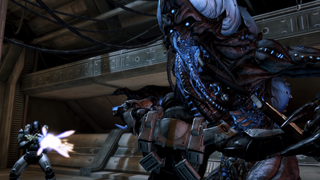 Cerberus lost control of the Adjutants shortly after Omega fell. The Adjutants promptly rampaged unchecked across the station, devastating much of Omega's population and its remaining gangs before Cerberus could contain and isolate them in a section of Omega's mines. Commander Shepard, Aria T'Loak, and Nyreen Kandros encounter several of these rogue Adjutants in said mining facility during Aria's campaign to retake Omega from Cerberus.

During the final assault on the Afterlife Club, Cerberus's command center, it is discovered that Cerberus had been developing the Adjutants from a Reaper-created virus. This virus is believed to have been created several cycles earlier and contain genetic traces of its original hosts, because the baseline form of an Adjutant does not match any known species. Cerberus planned to implant Omega's citizens with control devices, then infect them with the Adjutant virus to create an army of obedient Adjutants. When Aria and Shepard corner Oleg Petrovsky inside Afterlife, he unleashes the perfected Adjutants and a last wave of Cerberus troops in a last ditch attempt to stop them. Aria and Shepard prevail, however, and defeat the Adjutants.

Retrieved from "https://masseffect.fandom.com/wiki/Adjutant?oldid=522625"
Community content is available under CC-BY-SA unless otherwise noted.