Admiral Daro'Xen vas Moreh is a member of the quarian Admiralty Board. She is known for her keen scientific interest in the geth.

Daro'Xen possesses a clinical intellect, apparently having performed surgery on her childhood toys without any sort of guilt or attachments on the matter.

After Tali'Zorah vas Neema is accused of treason against the quarian people, Admiral Xen is one of the three admirals present as judges, along with fellow admirals Zaal'Koris vas Qwib Qwib and Han'Gerrel vas Neema. She is described by Han'Gerrel as being on the fence regarding Tali's treason and refers to the trial as "a farce born of fear." Though she has no interest in the trial, she knows that its subtle purpose is to stir the Migrant Fleet to reclaim their homeworld.

Xen describes Zaal'Koris as a coward and Han'Gerrel as "an aging warship". She sees Han'Gerrel's plans for war with the geth as foolish and self-destructive, but she has no qualms about experimenting on active geth. Her reasoning is that they are just machines which were created with the sole purpose of serving their creators.

She wishes to return the geth to the control of their rightful masters, the quarians who originally created them. If Commander Shepard brought Legion along to the Migrant Fleet, Xen finds it fascinating, originally assuming it to be a simple mech built with a geth shell, more so that it chose a name. She wistfully mutters about the things she could learn "under slightly different circumstances", to which Legion responds that it is not available for experimentation. Furthermore, Legion describes her plans for controlling the geth as "unsound" — a statement with which Tali'Zorah agrees.

After the conclusion of Tali's trial, Admiral Xen sends a message to Shepard's terminal that she did some searching of her own aboard the Alarei. She cryptically states that had Shepard presented the results of Rael'Zorah's research, humanity would've reaped the benefits. Instead, they "will watch from a distance as the quarian people reclaim not just their homeworld, but the largest synthetic army in the galaxy."

If Tali's father is outed during the trial, Xen (if spoken to) chastises Shepard for revealing the nature of Rael's work in public. In this case, it is likely the research will be purged, or at least be too politically volatile for her to take advantage of. 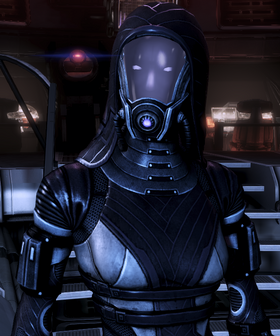 Admiral Xen's corps of research and development eventually create a means to cause massive white-noise jamming against the highly precise geth ladar scanning systems, giving the quarian fleet a major advantage in any attempt to wage war against the geth. Upon this revelation, the Admiralty votes to go to war, with Admiral Koris and possibly Tali dissenting (if she was exonerated in her trial and subsequently promoted to her father's vacant Admiral office). Xen leads the Special Projects group during the war.

If Tali is absent, Xen provides assistance to Shepard during their mission to disable a geth dreadnought. Unlike Tali, she doesn't fight through the ship, instead advancing to the operations center when Shepard has cleared the way and providing electronic support, later leaving with them in a geth fighter.

Xen takes pride in her technological contributions that initially drove the geth back, preferring the present war over Raan's bloodless caution or Koris's geth sympathies, although Reaper involvement turned the tables on her race. Nevertheless, she continues to create anti-synthetic countermeasures like the Arc Pistol and personally gives a prototype to Shepard aboard the dreadnought if Tali isn't around.

Shepard's squadmates have differing opinions on the weapon, although Xen gives her own in two cases. If EDI points out the illegality of polonium rounds against organics (which is roughly analogous to the Arc Pistol's effects against synthetics), Xen quips it's "fortunate" the prohibition doesn't apply against synthetics. If Liara comments that she knows people willing to pay handsomely for the weapon's design, Xen replies she's open for offers.

After the mission's completion, Admiral Xen expresses interest in dissecting Legion (or the Geth VI if Legion is unavailable). Shepard can emphatically discourage against it and cut off Xen before she voices her views on potential scientific benefits.

In the middle of the operation to reclaim Rannoch, Xen gets into an argument over inter-ship comms with Tali over ship operations. Tali wants Xen's ships to do search and rescue ops for escape pods, while Xen wants to continue salvage operations on the destroyed Geth dreadnought, asserting the need to understand geth technology.

Admiral Xen later briefs Shepard on the rescue mission for Admiral Koris, noting that the Civilian Fleet is in danger of breaking up without their leader.

If the geth fighter squadrons attacking the liveships have been dealt with, Xen offers her expertise in dealing with other geth servers. Shepard suggests asking Legion/Geth VI but Xen claims the geth only says, "No data available" whenever she inquires. She then asks how the server's platoon of Geth Primes cooperated with the Commander. Upon hearing they volunteered, Xen reminds Shepard that she could "examine" these geth to confirm their allegiance.

Admiral Xen creates a laser marking technology that can cut through the geth jamming signals, which essentially is the Sync Laser. This technology proves critical to Shepard's team during the assault on the Reaper base on Rannoch.

Should Xen survive the resolution of the geth/quarian war, she will be sent to the Crucible to help with development and construction. She is described as being dissatisfied with the device by Admiral Shala'Raan vas Tonbay and uses her brilliant scientific and technical skills to assist with the construction. Also, if Shepard supported Xen over Tali during their argument regarding escape pods, Xen is able to salvage useful materials for the war effort.