Mass Effect: Discovery
Admiral Ravis Kandros is a high-ranking official of the Turian Hierarchy, a member of the illustrious Kandros family, and the mother of Lieutenant Tiran Kandros.

Ravis organizes a meet between Tiran and other Hierarchy officials to discuss a possible link between forbidden geth technology and the Andromeda Initiative. Commander Narkkin is quick to see this as a mother pulling in favors for her son, but others in the group realize that the Initiative's actions and scope seem to be along the lines of establishing a sizeable private military force. Narkkin then suggests direct intervention, though Ravis and Tiran convince the others to let Tiran infiltrate the Initiative first to gather more substantive evidence.

Later, Ravis asks her son if he's committed to his course of action. She learns that Tiran wants to do something to prove himself worthy of the Kandros name without involving her reputation, and in response shares how she wanted to escape her own mother's shadow as well back in the day. Ravis believes her son has already earned his place regardless of what other people think, but nonetheless bids Tiran to return after the mission alive.

Tiran taps Ravis' intelligence resources during the mission, communicating via encrypted comm channels. He asks for info and whereabouts of a quarian named Shio'Leth vas Novarra. Ravis gives him the coordinates for the Novarra as information on the quarian is scant, also relaying to him that some people are already having second thoughts about the mission. 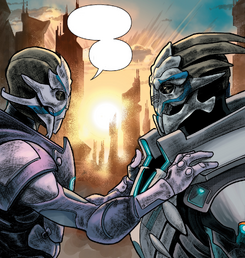 After Tiran's encounter with Agent Zeta, Ravis gives him the dossier they have on the salarian. Now that the Hierarchy has become aware of the dangerous ex-STG operative's involvement, Ravis pulls the plug on Tiran's mission and wants to bring him in. Her son insists he's close to a breakthrough, but Ravis is concerned he's drawing too much attention to himself for little to no progress and deems the endeavor not worth the risk anymore. When Tiran assures her he'll face the consequences of his actions after the mission, Ravis relents, promises to do what she can on her end, and warns him of an impending long discussion upon his return.

Ravis informs Tiran he has been declared AWOL and accused of gross dereliction of duty after Zeta's escape from Omega. She warns him they'll have no choice but to arrest him if he continues, but Tiran wants to see the mission through. Ravis could only hope whatever he finds is worth the cost.

When Tiran turns himself in to the Hierarchy at the conclusion of the mission, Ravis herself and the two others with her during the plot to spy on the Initiative serve as judges on his trial. Her son is to be discharged without honor effective immediately since he already declared himself guilty, extenuating circumstances notwithstanding. Afterward, Ravis initially disapproves of her son's choice to join the Initiative for real, pointing out he can still be around as a civilian contractor. Ravis always assured her son he'd get to write his own chapter in Kandros history someday, now he tells her the Initiative is his chance to write an entire book about it. Ravis comes to accept her son's decision and embraces him before he departs for the last time, her only regret being unable to read that book.

Retrieved from "https://masseffect.fandom.com/wiki/Admiral_Ravis_Kandros?oldid=487715"
Community content is available under CC-BY-SA unless otherwise noted.