Admiral Zaal'Koris vas Qwib-Qwib is one of the members of the quarian Admiralty Board. He is outspoken for his sympathetic views on the geth.

Zaal'Koris firmly opposes the idea of reclaiming the quarian homeworld, believing that the geth, being sentient, have as much right to live as the quarians, and advocates for the colonization of a new world instead. This has resulted in him being branded as a geth apologist. Han'Gerrel vas Neema in particular describes him as a "whining suit-wetter", while Daro'Xen vas Moreh considers him a coward.

He is initially shown to be distrustful towards Rael'Zorah and his daughter, Tali. However, he later admits that he never hated Tali, and only thought her father's aim for war against the geth was wrong.

His home vessel is the Qwib-Qwib. If Commander Shepard asks about the name of the ship despite Tali's warnings not to, the admiral haughtily explains that some of the ships in the Migrant Fleet are previously owned vessels from other cultures and that changing their registry information is not always possible. He does admit that a name like the Defrahnz or the Iktomi might have been better, but he is proud of the Qwib-Qwib and refuses to change ships because of "petty insults".

During Tali's hearing, Koris initially objects to Commander Shepard's defense of Tali, saying that "a human has no business in such sensitive military matters". Shala'Raan reminds him that since he declared Tali crew of the Normandy SR-2, Shepard has the right to defend her.

If Shepard brings Legion to Tali's trial, Koris raises a different objection, demanding that security remove the geth from the courtroom and accusing Tali of attempting to intimidate the admirals. Shala then reminds Koris that the captain of the Rayya, the ship on which the trial is taking place, permitted Legion on board and that Koris does not have the right to override a ship's captain on such a matter.

In either situation, Koris withdraws his objection. 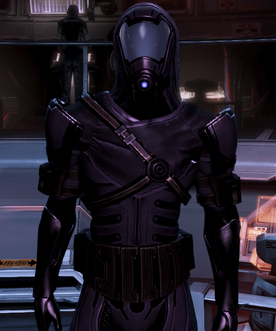 Against Koris's objections, and Tali's if she is appointed as an admiral, the other admirals chose to attack the geth, which caused them to seek help from the Reapers. He fears that the admirals might have destroyed the quarian race for good by attacking the geth. Koris leads the Civilian Fleet.

Koris's ship is shot down while destroying a geth planetary cannon, though he survived the crash. He gets separated from his crew and is cut off by the geth. While he is fighting for his life, Admiral Raan relays the news to Shepard, who may choose to extract him.

The Commander can either choose to obey Koris' plea to leave him and save his crew instead or convince him to come back to prevent the Civilian Fleet he commands from falling apart. If the latter is chosen, Koris later backs Shepard in making peace for both quarians and geth. Otherwise, the admiral dies fighting, priming a grenade before charging headlong into a Geth Prime and its troops.

If Shepard doesn't rescue Koris but still makes sure the quarians survive the attack, some civilian fleet captains panic and attempt to flee the system, but are cut down by geth in the attempt, reducing the Quarian Civilian Fleet's combat effectiveness.

If Koris is rescued, however, he manages to talk the captains into staying. Koris himself contributes to the overall war effort.

When Shepard attempts brokering peace during the assault on the Reaper base by commanding all quarian ships to stop firing, Koris lends the Commander his authority. If the geth are chosen over quarians, however, all quarian contributions to the Reaper war, including his, disappear with the decimation of the quarian people.