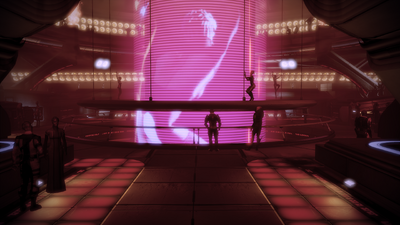 The Afterlife Club is a nightclub on the mercenary-controlled space station Omega. It is comprised of three floors, with the first floor resembling the layout of Chora's Den on the Citadel, featuring a large circular bar with asari dancers performing atop the center section. The second floor features a large circular opening in the center, above which more asari dancers perform on a large ring suspended from the ceiling and surrounding a large purple holographic cylinder that extends all the way to the ceiling.

Around the outer edge of this floor is an elevated section with holographic images along the wall and booths in which most patrons of the club spend their time. At the back is a private and well guarded lounge from which Aria T'Loak, the asari ruler of Omega, observes. The third floor consists of a balcony circling the entire edge of the club featuring flaming torches on the outer edge and provides a complete view down to the second floor.

Afterlife also has a section reserved for VIPs. It has a back-alley bouncer-protected entrance where people can get in with a namedrop passphrase.

Liara meets her drell informant at the bar in the club while searching for information about the then-missing Commander Shepard, and later meets with Aria T'Loak to learn where the Blue Suns have taken Shepard's body.

Shepard picks up several missions and assignments at the Afterlife Club.

At the time of Morinth's stay on Omega, people can get into the VIP section of Afterlife by claiming someone named Jaruut sent them. Shepard may help Samara track down her wayward daughter at the VIP section by namedropping Jaruut and attempting to stand out among the patrons.

Paul Grayson reports to Aria T'Loak in the club after he leads an assault on the Talons gang, walking in during discussions between the Talons and Aria. Afterwards, he briefly dances with Liselle in the VIP section.

Later, Kai Leng travels to Afterlife to negotiate with Aria on the behest of the Illusive Man.

After Cerberus conquers Omega in 2186, General Oleg Petrovsky converts Afterlife into his command center, even going so far as to throw out Aria's couch. When Aria returns with Commander Shepard to liberate the station, the final assault takes place in Afterlife. Initially Petrovsky had the edge defending the club. The beginning assault of the club led to the death of the Talon leader Nyreen Kandros. In a rage Aria fell into a trap laid out by Petrovsky, which incapacitates her. Despite facing a large contingent of soldiers and Cerberus-controlled Adjutants, Shepard is able to free Aria, and defeat the forces in the club. After Petrovsky surrenders his forces, and Aria announces to Omega's citizens that she has regained control of the station. With the battle for Omega over, Aria vows to rebuild.