Start a Wiki
watch 02:06
The First Human Pathfinder
Do you like this video?

A seasoned galactic explorer, Alec Ryder was a member of Jon Grissom's original task force which travelled through the Charon mass relay – the first encountered by humanity – in 2149. Ryder would go on to further prove his mettle by completing N7 training, solidifying himself as one of the Alliance military's elite. Eventually recruited into the role of Pathfinder for the Andromeda Initiative, Ryder represents the tip of the spear in humanity's efforts to find a new home in this unknown galaxy.

As the human Pathfinder, Ryder works closely with the Initiative's founder, Jien Garson. He is the Pathfinder for the human Ark ship, Hyperion. He has two children; a son and a daughter, born to his wife Ellen Ryder.

Born on Earth in 2129, Alec Ryder says his love of new frontiers was fostered by a childhood in the Sierra Nevadas. According to his service record, he joined the Alliance military and was eventually assigned to Jon Grissom's historic expedition through the Charon Relay.

His experience made him a candidate for what would later be known as N7 training back on Earth. Alec continued military service, most notably on Shanxi in the First Contact War against the turians.

Assigned as a military attaché to the Citadel in the late 2160s, Alec became interested in artificial intelligence as a means of human advancement. Being that AIs are illegal under Council law, however, his eventual research and experimentation on AIs resulted in a dishonorable discharge from the Alliance military. In spite of his disgrace, Alec continued his research, leading him to interviewing a quarian historian on the geth uprising, consulting Dr. Liara T'Soni and even reaching out to the Shadow Broker. 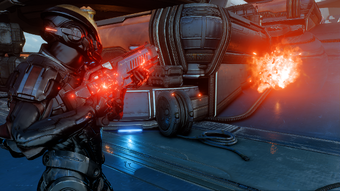 Upon arrival in Andromeda, the Hyperion suffers extensive damage from a mysterious cloud of dark energy, which causes one of Alec's children to be rendered comatose while being revived. Alec is seen in the bridge arguing with Captain Nozomi Dunn about how to proceed. Because Initiative protocol dictates that the Ark proceeds towards their appointed Golden world in lieu of contact with the Nexus and other arks, Alec orders Lieutenant Harper to gather the Pathfinder team for an expedition to the planet.

During atmospheric entry, it is discovered that Habitat 7 suffers from perpetual lightning storms. The shuttles of the Pathfinder team are hit by lightning and end up being separated all over the surface of the planet. Alec's child eventually gets into radio contact and rendezvoused just outside of a Remnant structure occupied by the kett. 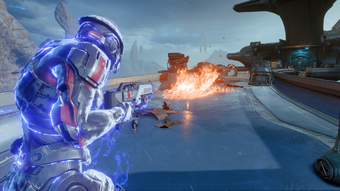 The Pathfinder team fights through kett forces and Alec uses his advanced AI, SAM, to begin translating the Remnant language. SAM is able to decipher enough of the language to allow Alec to interface with Remnant terminals. Alec leads the Pathfinder team to the control center of the Remnant structure, which Alec activates in order to stabilize the planet's atmosphere.

Unfortunately, activation of the processor causes its purification field to throw the Ryders off the platform. Alec sacrifices himself to save his child from asphyxiation after they sustain damage to their helmet. Ryder Sr. gives his own helmet to his child and transfers the role of Pathfinder to Ryder Jr., creating a deeper bond between his offspring and SAM. 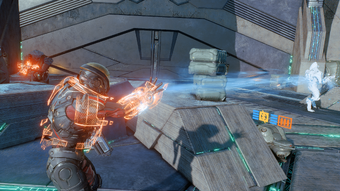 Ryder Jr. later learns that Alec had encrypted some of his memories and manages to unlock them by finding eidetic triggers throughout Heleus. Through Alec's memories, the Pathfinder learns that Alec developed SAM to find a cure for his wife's AEND disease. As his wife's condition worsened, Alec became a pariah for his AI research and used up all his savings mid-development. Fortunately, a mysterious wealthy benefactor that backed the Initiative helped Alec complete SAM and recruited him to the Andromeda Initiative. Furthermore, Alec learned of the existence of the Reapers and had recruited his children to the Initiative in hopes of sparing them. Alec also stowed away his wife Ellen Ryder in a Hyperion stasis pod under an alias before their trip to the the Andromeda galaxy. Alec hoped that Ellen being preserved in cryostasis would halt all progress of her disease until a cure can be found. It is also the reason why Alec made his offspring Pathfinder; so they could follow through with the process of saving her and reunite the family.

The benefactor revealed to Alec that one of its motivations for funding the Andromeda Initiative was to recreate society should civilization be annihilated by the Reaper War. According to Alec's personal logs however, Alec had misgivings about the anonymous benefactor which was shared with Initiative founder Jien Garson. Both seemed concerned about the benefactor's foreknowledge of the Reaper War, its continued secrecy, and feared it may have sinister ulterior motives. Alec was concerned that what he knew about the benefactor and the Reapers would remain secret and entrusted his offspring with the information when he made them Pathfinder.

Retrieved from "https://masseffect.fandom.com/wiki/Alec_Ryder?oldid=521228"
Community content is available under CC-BY-SA unless otherwise noted.