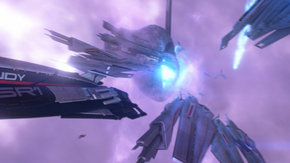 The Alliance Navy is one of the greater naval forces in Citadel space. It is known to number at least several thousand ships.[1] Its military prowess has drawn the attention of the Citadel Council. While the Council is concerned about the possible outcome of another war between humans and turians, they are also keen to harness the Alliance Navy's peacekeeping potential, especially in unstable regions like the Skyllian Verge and the Attican Traverse. The Navy also makes humans an attractive prospect as the newest Council species.

The Navy is a space combat force primarily charged with protecting human colonies, space stations, and mass relays. While the Navy stations only use token garrisons to guard Alliance colonies, its strength is centered upon powerful fleets stationed at mass relay nexuses that can rapidly respond to any colony under attack.

The Alliance Navy possessed over 200 vessels as of the First Contact War in 2157 CE, including several dreadnoughts, and was divided into at least two fleets. By 2186 CE and the onset of the Reaper War, it possessed nine dreadnoughts and was divided into at least eight fleets. Alliance fleets are subdivided into numerous flotillas, each of which include a cruiser and 4-6 frigates. Its individual vessels range considerably in size and firepower, varying from corvettes (small, ten-man craft used primarily for patrol and recon), to hundred-meter-long frigates to nearly kilometer-long dreadnoughts. Fleet units are also supported by fighters and dedicated interceptors deployed from cruisers, dreadnoughts, and carriers. Fighter carriers, dreadnought-sized ships that contain extensive hangars and employ fighters as their main armament, are a distinctly human innovation. Destroyers, vessels larger than frigates but smaller than cruisers, are also known to be operated by the Alliance Navy.[2][3]

Following the Battle of the Citadel in 2183, Admiral Steven Hackett is appointed the head of the Alliance Navy. 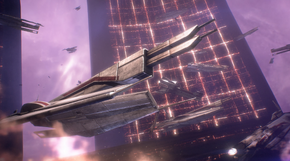 The First Fleet is the largest in the Alliance Navy. Based at Arcturus Station, the First Fleet guards the mass relay connecting to the Sol system and serves as a reactionary force able to respond to any attack across three different clusters.

During the Reaper invasion in 2186, the First Fleet is stationed near the Charon Relay. By the time Admiral Hackett ordered a retreat, the fleet had been cut in half. Commanding Admiral Ines Lindholm made the painful decision to use a tenth of the fleet's remaining vessels as cover so the remainder could escape. Her gamble paid off, as the First Fleet limped out of the relay to rally with the rest of the Alliance forces on the run.

The First Fleet is available as a War Asset in Mass Effect 3.

During the Reaper invasion in 2186, the Second Fleet helps defend Arcturus Station. Admiral Hackett is eventually forced to sacrifice the entire fleet to give the Third and Fifth Fleets a chance to escape.

Stationed at Arcturus Station, the Third Fleet is headed by Admiral Nitesh Singh. When the Reapers came for the station in 2186, Singh had already pulled his command ship, the SSV Logan, back to an ideal firing position for its mass accelerator cannons. The dreadnought's guns managed to slow down a destroyer before it could demolish the Third Fleet, but Singh was forced to retreat in the face of overwhelming opposition from the Reapers.

The Third Fleet is available as a War Asset in Mass Effect 3.

The Fourth Fleet was stationed near Earth at the time of the Reaper invasion in 2186. It was given a few minutes of advance warning after the Reapers emerged from the Charon Relay and engaged with the First Fleet, but was destroyed nonetheless.

The Fifth Fleet is also known as the Arcturus Fleet, as it is based at Arcturus Station. Admiral Hackett is the current commanding officer, and frequently gives Commander Shepard missions for the Alliance. Subsequent to the Battle of the Citadel, the Fifth Fleet is awarded the Palladium Star by the Citadel Council for their involvement in that pivotal battle.

During the Reaper invasion in 2186, the Fifth Fleet helps defend Arcturus Station. When the Reapers begin to overwhelm Alliance forces, Admiral Hackett sacrifices the Second Fleet to allow the Third and Fifth Fleets to escape.

The Fifth Fleet is available as a War Asset in Mass Effect 3. 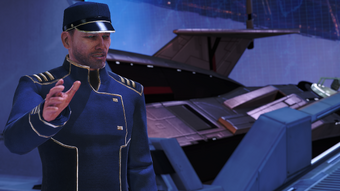 The 63rd Scout Flotilla forms part of the Fifth Fleet under the command of Rear Admiral Mikhailovich. The Normandy was originally going to be assigned to this flotilla, until she was given to Commander Shepard to hunt Saren Arterius.

If the Citadel Council is not rescued during the Battle of the Citadel in 2183, the 63rd suffers the fewest losses of any Alliance flotillas while providing critical support for the Fifth Fleet's carriers and dreadnoughts. Mikhailovich is promoted to Admiral after the battle and tasked with rebuilding and upgrading his ships.

The Sixth Fleet was stationed near Terra Nova at the time of the Reaper invasion in 2186. Instead of being directly engaged in battle, the Reapers bypassed the Sixth Fleet entirely on their way to Earth. Their last order from Admiral Hackett was to avoid engagement and lay in reserve. The fleet later comes out of hiding and rallies with the rest of the Alliance after Shepard's visit to a Cerberus facility on Horizon.

The Sixth Fleet is available as a War Asset in Mass Effect 3.

The Eighth Fleet was unable to stop the Reaper advance in 2186 and attempted to regroup at a secret Alliance station orbiting Ontarom, but was ambushed by Reaper forces. The fleet's surviving ships now harass the Reaper fleet, giving cover to colonists fleeing the area and defending a strategic communications hub on Ontarom's surface. 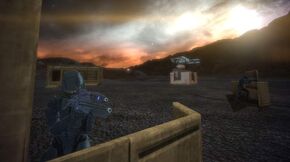 The 2nd Frontier Division was a garrison based on Eden Prime. It was comprised of two marine brigades, the 212 and the 232. Due in to the security issues involved, the garrison was called up to help when a Prothean Beacon was found, as factions from the Terminus Systems might have risked attacking Eden Prime for the beacon. The 212 guarded the dig site while the 232 was attached to the scientists' camp.

The entire division was practically wiped out when the rogue Spectre, Saren Arterius, and his geth army attacked the colony without warning. Few marines survived the attack.

The 10th Frontier Division is a Systems Alliance marine division. The 3rd Brigade, 14th Infantry Regiment is currently assigned to a listening post on Nepmos to monitor pirate activity.

The 103rd Marine Division is Earth's largest collection of Special Forces soldiers. Officers from notable battles, such as the Skyllian Blitz and the First Contact War, run harsh training exercises in a variety of environments, insisting the marines be prepared to storm any beach, on any planet.

The 103rd Marine Division is available as a War Asset in Mass Effect 3.

The Alliance has two dreadnought classes currently in service, the older Everest class and the newer Kilimanjaro class. The Everest class is an 888-meter dreadnought with a main gun capable of accelerating a 20 kilogram slug to 1.3% the speed of light (4025 km/s) for a kinetic energy yield equivalent to 38 kilotons of TNT. The Kilimanjaro class is armed with 156 broadside mass accelerator cannons, 78 on each side. The broadside guns are each as long as 40% of the ship's width.

Possessing more firepower and protection than a frigate and a greater cruising speed and maneuverability than a dreadnought, cruisers are the standard combat unit encountered away from large naval bases and form the backbone of the fleet. Cruisers lead frigate “wolf pack” flotillas in small engagements and fulfill a supporting role to the dreadnoughts in full scale fleet combat.

Frigates are light escort and scouting vessels equipped to screen and support the fleet. They are outfitted with GARDIAN defense turrets to provide anti-fighter screening for capital ships and Javelin torpedoes to take down opposing kinetic barriers. In fleet combat, frigates are organized into "wolf pack" flotillas of four to six ships. They use their superior speed and maneuverability to evade and maneuver into the opposing fleet to take down ships whose kinetic barriers have been destroyed.

Carriers are a uniquely human design first deployed by the Alliance Navy. As large as a dreadnought, carriers are instead equipped with extensive hangar bays, using fighters and interceptors as their primary offensive armament. In fleet combat, carriers launch their disruptor torpedo bearing fighters and then try to stay clear of the action, as their hangars are essentially a corridor through the armor into the heart of the ship and a well placed shot could gut the ship.

Battle of the Citadel[]

The Alliance Navy was instrumental in saving the Citadel when the station came under attack by Sovereign and Saren's geth. With the Citadel Fleet cut off by the locked-down mass relays and under heavy fire, the Alliance Navy was the only force large enough to provide reinforcements. Depending on Commander Shepard's orders, the Fleet either sustained heavy losses saving the Destiny Ascension, or abandoned the flagship in order to concentrate all their firepower on Sovereign.

The Alliance Navy suffered the most devastating defeat in its history when the Reapers invaded the galaxy in 2186 and made their way to Earth. The Sixth and Seventh Fleets, located around Terra Nova and Eden Prime respectively, were completely bypassed as the Reapers committed to a headlong rush to humanity's most important world. Knowing that something was on its way, Admiral Hackett moved the Second, Third, and Fifth Fleets to guard Arcturus Station. When the Reapers arrived, they sent a dozen capital ships as a screen to distract the Alliance fleets while the bulk of Reaper forces used the Arcturus relay to travel to Sol. Hackett was eventually forced to sacrifice the Second Fleet as a distraction to allow the Third and Fifth Fleets to flee, leaving Arcturus Station, the Alliance's capital and home to 45,000 people, to be destroyed.

At Sol, the Reapers immediately engaged the First Fleet, which had been stationed at the Charon Relay. This gave the Fourth Fleet, in orbit around Earth, a few minutes of advance warning. This final defense was quickly overwhelmed. The First Fleet was rapidly cut in half, and a tenth of its ships were sacrificed for the rest of the fleet to escape and rejoin Admiral Hackett. The Fourth Fleet was completely wiped out and the Reapers began to land on Earth.

Other known branches and divisions[]

A dedicated survey and exploration division of the Alliance Navy, whose primary role in peacetime was as a survey force to chart out new systems. However, in 2185 the Flotilla suffered a major scandal when it was discovered that a number of service personnel were part of a criminal conspiracy to conceal information on rich mining deposits in order to sell the locations to the exploration firm, Baria Frontiers. The NEF was still recovering from the scandal at the outbreak of the Reaper War in late 2186.

The Alliance Naval Exploration Flotilla is available as a War Asset in Mass Effect 3.