The Alpha Relay is a mass relay that resides in the Bahak system of the Viper Nebula. This relay was named "Alpha" by Dr. Amanda Kenson and her research team, who determined that it was the oldest known mass relay in the galaxy.

Outwardly the Alpha Relay appears to be a standard mass relay, differing little, if at all, from the rest of the mass relays scattered throughout the galaxy. However, it is unusual in its potential range and versatility. Alpha usually sends and receives mass at the range of a normal secondary relay, but if certain controls are adjusted, it becomes powered by an unprecedented amount of dark energy that could send cargo to sixteen other relays and even across a great distance to the Citadel. The Batarian Hegemony has long been aware of Alpha's capabilities, but has covered them up to avoid retaliation by other races who would view the relay as a direct threat to their territories. 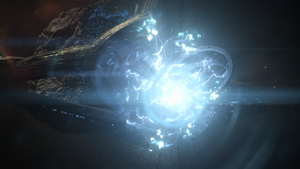 After discovering a Reaper artifact, Object Rho, embedded in an asteroid near the Alpha Relay, Dr. Kenson's research team learns that the Reapers will soon arrive in the system and will use Alpha to coordinate an invasion of the galaxy. Dr. Kenson and her team decide that Alpha must be destroyed, even though this would kill the more than 300,000 batarian colonists in the system. With Alpha gone, the Reapers would be forced to detour to another relay, a journey that could take months or years more. The research team establishes Project Base on the Object Rho asteroid, and smuggles in engines and navigation systems from Omega. Once "the Project" is complete, the team plans to ram the asteroid straight into the Alpha Relay. Before they can act, however, the team became indoctrinated by Object Rho. When Commander Shepard intervenes during the events of Arrival, the Commander manages to activate "the Project" despite Dr. Kenson's attempt at sabotaging the asteroid's propulsion system. The asteroid strikes the Alpha Relay and tears it apart. The resulting explosion, comparable to a supernova, wipes out the Bahak system.