Mass Effect Wiki
Register
Don't have an account?
Sign In
Advertisement
in: Locations, Planets, Planets With Satellites,
and 2 more
English

Amaranthine is a chilly rock world with an atmosphere of carbon dioxide and nitrogen. Its frozen surface consists largely of light titanium and aluminum oxides, with deposits of thorium and other heavy metals located in the deep crust. Amaranthine was named by the human poet Sofia Cabral during her tour of duty aboard the Alliance surveyor ship Kupe. Under the dim light of the red dwarf Fortuna, the surface of this world is lit in rich twilight blues and purples even at midday. 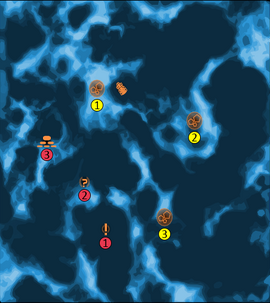 One moon is visible from the landing site.

In addition to having a moderate breeze, the operational area on the planet has very poor visibility due to the twilit conditions. Many points of interest lie on or at the foot of highlands, requiring Mako traversal up and down mountainous terrain to reach.