The Anarchist is an Outlaw unit. They specialize in flushing targets out of cover and closing in for the kill. As a mid-tier enemy, an Anarchist or two can accompany a group of Raiders and Sharpshooters. On Firebases, they typically appear on later waves if APEX teams keep clearing previous waves. 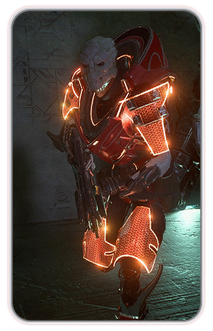 Turians running with outlaw bands have turned their mandatory military training to less noble purposes. They override the safeties on ex-military hardware to handle a higher explosive yield, resulting in deadly "inferno grenades" that leave thermite deposits on the ground after impact. The thermite can cling to armor and cause massive injuries.

APEX's largely turian volunteer force takes a dim view of these anarchists, seeing them as not only a threat but an affront to the turian values of honor and service. Those who cannot be forced to surrender are hunted ruthlessly, though this has only driven Anarchists to ever-greater feats of military engineering.

Anarchists are armed with the M-23 Katana and can throw Omni Grenades.

They are armored and has access to tech armor.

This article or section is a stub. You can help Mass Effect Wiki by expanding it.
Retrieved from "https://masseffect.fandom.com/wiki/Anarchist?oldid=516088"
Community content is available under CC-BY-SA unless otherwise noted.