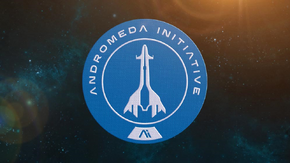 Founded in 2176 and launched in 2185, the Andromeda Initiative is a civilian, multi-species project created to send scientists, explorers, and colonists on a one-way trip to settle in the Andromeda Galaxy. With powerful benefactors lending their support, the program has grown substantially in scope since its inception. The Initiative’s ultimate goal is to establish a permanent presence on the seemingly resource-rich frontier of Andromeda and eventually create a reliable route between it and the Milky Way Galaxy.

Six Ark ships have been constructed for this venture, equipped with cryostasis chambers for its members to sleep in during the 600-year-long journey. Project founder Jien Garson travels in the Nexus, the main hub of the expedition. Four of the other five Arks each contain a different species; most humans are aboard Ark Hyperion. Each Ark is assigned with its own Pathfinder, a mix of elite soldier, scientist, and guide who will be tasked with finding a new home. For the Hyperion the selected Pathfinder is Alec Ryder.

While the Andromeda Initiative's long-range scans have identified several potentially-habitable planets in the Heleus Cluster, the possibility of encountering harsh planetary conditions during the search for a suitable Golden world exists. The Pathfinder and their team will be responsible for assessing and exploring any environment deemed necessary as the mission unfolds.

A project as massive in scope as the Andromeda Initiative is extremely expensive. Expenditures are known to have reached quintillions of credits.

“Charting the Andromeda Galaxy for habitable planets presents a unique challenge. Observation is limited by light, and given Andromeda's distance, any observations from the Milky Way are 2.5 million years out of date–enough time for a planet to have altered irrevocably.

Initial attempts to identify settlement sites were made by obtaining asari astronomical surveys and running them through predictive models. But Jien Garson was unwilling to risk thousands of colonists without solid information.

Eventually, the Initiative obtained promising data from quarian explorers who claimed to have found a geth array on the fringes of the Perseus Veil. This array was supposedly built from three mass relays, using sensors in the combined relay corridor as a form of FTL "telescope" to observe dark space beyond the galactic rim. Why the geth expended so much effort to study dark space is not known.

Amongst these observations were near-contemporary surveys of Andromeda. When our predictive models confirmed them within an acceptable margin, the Initiative was able to begin identifying "golden worlds."”

There was more to the Andromeda Initiative than the publicly-announced ideals of exploration and colonization of the Andromeda galaxy. From Alec Ryder's personal logs and encrypted memories, it is revealed that the Initiative served another purpose: saving Milky Way's civilizations. According to a secret recording by Jien Garson, she was running out of funds for the Andromeda Initiative. Before the project could be scrapped, a mysterious "benefactor" stepped in to provide unlimited funding for the Initiative, motivated by the belief of a looming catastrophic threat to the galaxy.

In 2183, after Saren Arterius' failed geth attack and Sovereign's appearance at the Citadel, the existence of the Reapers was revealed. Though the Citadel Council was still skeptical of Commander Shepard's claims, the benefactor considered it a confirmation of their suspicions. Fearing the imminent arrival of the Reapers and an ensuing war would cause a fight for resources, the benefactor and Alec agreed to hasten the schedule for the Arks' departure. The benefactor desired to safeguard a portion of Milky Way civilizations from the Reapers by sending 100,000 colonists to Andromeda using the Initiative as a cover.

Retrieved from "https://masseffect.fandom.com/wiki/Andromeda_Initiative?oldid=520802"
Community content is available under CC-BY-SA unless otherwise noted.