The angara are the only known extant sapient race native to the Heleus Cluster of the Andromeda galaxy, and arose on the planet Havarl. By the time of the Andromeda Initiative's first contact with them, the angara had been waging a decades-long resistance against the invading kett.

The angara are warm-blooded mammals. They have a similar leg structure to a quarian, a salarian or a kett, along with relatively broad shoulders and narrow waists. They have two black eyes with blue irises, a single pair of nostrils, and folds of flesh on the sides of their heads that extend to their chests. Angara hands have the bone structure for five fingers, but the final three fingers on each hand are densely webbed together into a single digit. Angara are sexually dimorphic: male angara are taller than females, and females have wider hips and rounder faces. Skin colors feature various shades of blue or mauve, sometimes shading into green or tan. Their blood is deep blue in color. 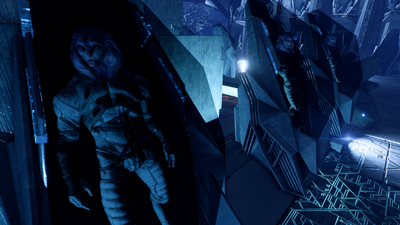 The angara as a people are very free with their emotions, demonstrative and "larger than life". If they love you they hug you, if they hate you or if you make them mad, they punch you; this extends to their own family members. The angara are typically mistrustful of other races, which is understandable; the last outsiders they met were the kett and they have done nothing but attack and enslave the angara.

Retrieved from "https://masseffect.fandom.com/wiki/Angara?oldid=515045"
Community content is available under CC-BY-SA unless otherwise noted.