Anita Goyle is the first human ambassador to the Citadel. Goyle takes her job extremely seriously, well aware that she is representing humanity as a whole to the Citadel races.

In 2165 CE Goyle is described as a striking woman in her early 60s, with a medium build, long silvery hair, Middle Eastern features and emerald eyes. She had a reputation for cutting through political BS.

Goyle meets with David Anderson when he returns from Sidon and reveals that the facility has been secretly researching artificial intelligence. She tells him to discreetly track down the source without drawing the attention of the Spectres.

When the truth about Sidon is leaked to the Council, they plan to impose heavy sanctions on the Alliance, but during the audience Goyle realises that the Council is actually concerned about humanity's very rapid expansion and is seizing this opportunity to keep them under control. She gives a passionate speech, describing how humans have become swiftly integrated into Citadel society, the galactic economy, and even C-Sec itself. Goyle also points out that without facilities like Sidon, it would be impossible to understand synthetic intelligence — leaving them vulnerable in the future when dealing with races like the geth — and that it is naive to think humanity is the only species doing AI research. She refuses to accept the heavy penalties the Council proposes and negotiates a better deal.

After Kahlee Sanders reveals Dr. Shu Qian's involvement in the events at Sidon, Goyle decides to reveal the recovered files and information to the Council willingly, as a show of good faith. Once the Council has agreed to pursue Edan Had'dah and find Qian, by sending Saren Arterius to track him down, Goyle asks for Anderson to be sent along too as a possible Spectre candidate. She is surprised by the sudden acquiescence of the asari Councilor, only realising later that the Council anticipated all her requests and discussed them in advance, subtly showing that she still has a lot to learn about galactic politics.

Goyle is not particularly happy when Saren files a report that Anderson ruined the mission on Camala, costing hundreds of lives, but she is not looking to make an example of Anderson to save face for humanity, and lets him return to his military career. 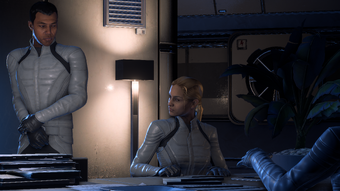 Ambassador Goyle appears in one of Alec Ryder's memories presented by SAM to one of Ryder's children. In the memory, Alec urges Goyle to approve the creation of a strand of artificial intelligence that avoids the creator-construct gap seen in other AIs. He states that the technology will benefit humanity by eliminating the technology gap with other species.

Goyle weighs Alec's points but warns him AIs are illegal in Council space and if he's discovered it could set humanity's standing back decades. Looking back at her aide, who also shares her sentiments, Goyle appreciates Alec's work but ultimately denies his proposal.

The former ambassador was one of the first people Alec pitched his AI research to. When his AI kernel was stolen, Alec suspects Goyle, her aide, or whoever else they could have told about it may be the ones responsible for the theft. His suspicions are partially confirmed when Alis Silhaus, an unaffiliated third party, claims knowledge of the theft based on Alec and Goyle's meeting.

Goyle seemed interested in SAM at the time, but her wariness drove her to reject Alec's research. When it became known Alec was dabbling in AI, Goyle corroborated the reports, ultimately causing Alec's dismissal from the Alliance.