The Anointed is a kett unit entrusted with a hard-hitting weapon and shields.

ANALYSIS:
Biologically similar to the kett Chosen, the Anointed are armed with a heavy plasma cannon to drive enemies into cover. 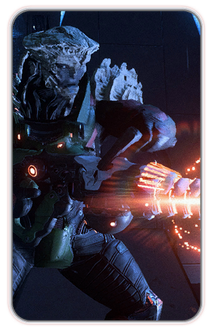 The kett soldiers known as Anointed appear to be of similar caste to the Chosen: infantry equipped with light armor. Anointed, however, wield heavy plasma cannons, making them a rallying point for other kett forces, and shield themselves with kinetic barriers against splashback. A barrage from an Anointed's plasma cannon can shred through enemy barriers and severely damage ground vehicles.

Communication intercepts suggest that Anointed assist in coordinating Chosen squads and act in an NCO role. It is unclear if the term "Anointed" refers to a senior rank amongst the Chosen, or if Anointed are part of a separate division within the kett infantry.

With a new understanding of kett exaltation, it is now apparent that Anointed are exalted angara, transformed into soldiers of the kett cause. Their title may refer to foot soldiers who have been entrusted with a more crucial battlefield role by their superiors.

The Anointed are armed with Soned Assault Rifles, which can shred shields (and health) alarmingly fast. At close range they can swing their heavy rifles at their enemies, causing significant damage.

The Anointed are shielded, which protects them from disabling skills such as Pull or Singularity.

Retrieved from "https://masseffect.fandom.com/wiki/Anointed?oldid=522810"
Community content is available under CC-BY-SA unless otherwise noted.