Anto Korragan is a batarian bodyguard who serves Aria T'Loak on Omega. He is one of Aria's most trusted henchmen and acts as her second-in-command.

In 2183, after the destruction of the SSV Normandy, Anto is seen preventing Liara T'Soni and Feron from seeing Aria T'Loak, Omega's leader and "pirate queen". When reminded that Aria might not appreciate that Anto has been selling information to Feron about who Aria meets with, Anto takes them up to Aria. Aria explains that she already knows about Anto's dealings since nothing on Omega is a secret from her, and that he's lucky she's fond of him.

Anto is encountered in 2185 when Commander Shepard enters the Afterlife Club to speak with Aria. Anto is stationed near the right staircase to Aria's booth at the club.

One of the packages that Ish asks Shepard to retrieve is a message which reveals that although Anto works for Aria, he also wants to pick up outside work. The message speculates that this might be a means to exploit Anto and infiltrate Aria's organization. Shepard can alert Anto of Ish's activities. Anto is thankful of the heads-up and "cleans up the mess" by later eliminating Ish. 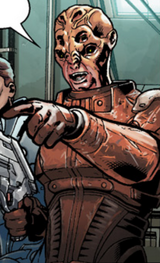 In 2186, When the Adjutants attack, Anto leads Omega's defenders in protecting Afterlife. He is almost killed, but Aria arrives in time to save him and defeat the remaining Adjutants.

While Aria boards the Cerberus warship Elbrus with General Oleg Petrovsky to oversee the defense against a wave of Adjutant-controlled ships arriving from the Omega 4 Relay, Anto stays behind in Omega Control to monitor the situation. He is one of the first to learn that the Elbrus has crossed the relay and left Omega, and assumes that Aria is either dead or transformed into an Adjutant. He begins planning to take over as Omega's leader, but his scheme is interrupted by Colonel Raymond Ashe, who slaughters Omega Control's operators and prepares the station to receive a Cerberus occupation force.

In Aria's absence, Anto tries to unite Omega's various factions against Cerberus, but is unsuccessful in preventing infighting from breaking out. When Aria returns, Anto willingly returns to his duties as her assistant as she unites Omega's forces and the battle for the station ensues. Aria uses her allies to distract Petrovsky's troops while she and Anto make their way to the Afterlife Club to contact and confront the Illusive Man. Cerberus springs another trap, however: an Adjutant that Colonel Ashe had smuggled into the building in stasis is awakened and attacks Anto, killing him.

Retrieved from "https://masseffect.fandom.com/wiki/Anto_Korragan?oldid=487854"
Community content is available under CC-BY-SA unless otherwise noted.