In the Kett Empire, an Archon is a leader of groups of kett assigned to specific locations within the galaxy, with the purpose of gathering new species viable for exaltation and sending related data back to their homeworld. This Archon leads the Heleus Cluster contingent. He has maintained control of the cluster for almost seventy-five years through long, patient strategies and brutal subjugation. According to the angara, the Archon blinded them with promises of friendship and gifts before turning the angaran leadership against one another and ordering the conquest of their worlds. 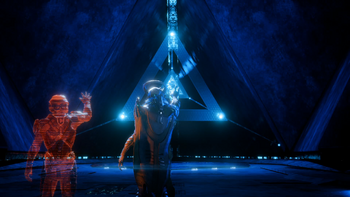 The Archon first appears on Habitat 7 after the kett's first contact with humans. Very interested in learning how Alec Ryder accessed the Remnant monolith, the Archon uses a drone to holographically recreate the human's movements inside the atmospheric processor.

Later, the Archon's fleet intercepts the Tempest upon its arrival in the Onaon system and pins the ship against the Scourge. The Archon demands to know who on the ship accessed the Remnant vault. The Tempest manages to outrun his fleet, successfully navigating through the Scourge, resulting in a few kett ships being destroyed by the anomaly in their pursuit.

Later, the Archon contacts the Cardinal on Voeld at the same time Ryder and the angaran Resistance attacks the Cardinal's base. The Archon orders the Cardinal to bring Moshae Sjefa directly to him, but Ryder is able to save the angara scientist before that could happen.

The Archon later captures the salarian ark, the Paarchero, and begins experimenting on some of its occupants, as well as on some krogan scouts. When Pathfinder Ryder comes to their rescue, the Archon manages to immobilize the human and their squad. The Archon takes a blood sample from Ryder, and simultaneously injects a device into their SAM implant before leaving.

The Pathfinder breaks free from stasis via SAM temporarily killing them then makes it to the Archon's sanctum, where he keeps a museum full of Remnant artifacts. The Archon, via hologram, then announces his realisation that SAM is what enabled Ryder to access Remnant technology. He's about to order his flagship to fire on the ark and Tempest in order to strand Ryder, when Pathfinder Zevin Raeka sets off an EMP, enabling both ships to escape.

In spite of Ryder's escape, the Archon has gained access to the human's memory flashes from when the Pathfinder was clinically dead. The Primus reminds the Archon that their orders were to exalt the Heleus Cluster, not research the Remnant, and that their superiors are questioning his leadership. The Archon states that by seizing control of Meridian, the kett would have the power to turn entire planets into wastelands, making it the perfect weapon to force their enemies to submit to exaltation or face annihilation.

Ryder can encounter infighting between two groups of kett on Elaaden. Later investigation reveals that a group of scientists felt that the Archon was beginning to be 'obsessed' with the Remnant, blocking off communications with their homeworld and straying away from their goal in Heleus. Manifestos made by the Primus imply that the Archon intends to be the sole controller of Remnant technology and may openly rebel against the kett homeworld.

At the same time Ryder manages to trace Meridian's location at Khi Tasira, the Archon appears via hologram, revealing he had seized ark Hyperion to sever SAM's connection to the Pathfinder. He then proceeds to capture Ryder's sibling, who also possessed the SAM implant he needs to access Meridian, though not before the Ryder twin reboots the Pathfinder's connection. With Hyperion leading his fleet, the Archon arrives at Meridian first, with the Tempest leading a Remnant fleet in pursuit. Once Hyperion enters Meridian, the Archon sabotages and abandons the ark to distract Ryder while he takes his hostage to Meridian Control.

In the battle for Meridian, the Pathfinder tracks the Archon and his troops to the control chamber where he had plugged himself into the system, summoning a multitude of Remnant bots, including an Architect, to attack Ryder, declaring that anyone resisting him deserved no more mercy. With the Archon using too much power, Ryder's sibling is able to use their connection to activate consoles for the Pathfinder to disconnect the kett leader from the system, resulting in his death. After the battle, Initiative scientists retrieve the Archon's body and conduct an autopsy, with one theorizing that the Archon had invested too much of his mind into the Remnant systems during the battle, and his abrupt disconnection from Meridian fragmented the Archon's consciousness.