Edit
watch 02:36
Wiki Targeted (Games)
Do you like this video?
Play Sound 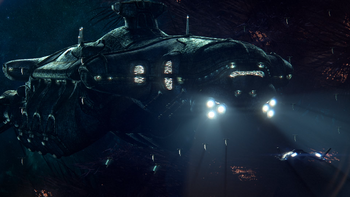 ANALYSIS:
The Archon's flagship, Verakan, appears to be operating normally and is unaware of the Tempest's presence. However, the salarian vessel Ark Paarchero has been captured and is tethered to the kett ship. Sensors show no signs of damage to the ark. Its power levels are on standby.

The Verakan is first encountered by the Pathfinder team during an interdiction operation by the kett while the Tempest is en route to Onaon. The Andromeda Initiative vessel manages to elude the Verakan and its complement of fighters by navigating through a patch of Scourge.

Later, the Verakan is attached to Paarchero in Tafeno via long cables as part of ongoing kett experiments against the salarians. The Pathfinder team manages to infiltrate the kett flagship, disengage the cables, and escape the system with the salarian ark.

Polski
Community content is available under CC-BY-SA unless otherwise noted.