The Archon's Sword serves as the kett leader's personal enforcer. The Archon has explicit instructions to his troops that whenever she's around her orders are to be followed as if they came from himself. When Pathfinder Ryder meddles one time too many in the affairs of her superior, the Archon tasks her to hunt down the human upstart.

During the incursion of Ryder's team into Khi Tasira, the Sword is placed in charge of all kett forces in the massive space station. She warns them about the decoy maneuvers the team pulled off to infiltrate the station, and orders the troops to incapacitate and capture the Pathfinder.

The Sword later approaches a Remnant exploratory vessel and directs her accompanying troops to board it when Ryder activates the exploration sector tower.

When the station's defenses go online and begin decimating kett warships, the Sword confronts Ryder in the main command hub. Despite trying to put up a fight, she fails and gets killed along with the many minions she brings with her. 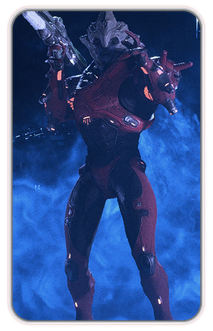 In combat, the Archon's Sword is said to favor cunning over brute strength, cloaking herself with the same techniques as kett Destined before striking fearlessly. Psychological profiles, though hampered by an incomplete understanding of kett psychology, suggest she is completely loyal to the Archon and his ideals.

Her title has provoked discussion amongst Nexus scientists, as it either underlines her devotion to the Archon's cause, or it implies a ceremonial and historic role. It is possible that the Archon's Sword represents a greater tradition within kett society not yet understood.

The Archon's Sword wields a Hesh shotgun with a melee attachment that she almost always uses for ranged shooting. On occasion she may throw grenades that deal damage to a small area that lingers for a few seconds before dissipating. In close range she may hit back by swinging her shotgun, although she prefers to fire it instead.

The Sword has strong shields and health. Whenever the shields go down, she cloaks when she's able, summons reinforcements if available, and attempts to reappear somewhere out of range. This sort of cloaking differs from regular Destined's since she completely disappears. A telltale patch of blue smoke remains, although she's not there.

The smokescreen emanating from vents on her back allows her to conceal kett units within her vicinity.

Retrieved from "https://masseffect.fandom.com/wiki/Archon%27s_Sword?oldid=519743"
Community content is available under CC-BY-SA unless otherwise noted.