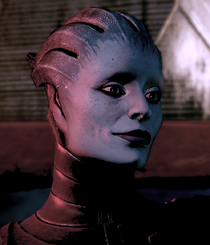 Ardat-Yakshi (meaning 'Demon of the Night Winds' in an old asari dialect) is a rare genetic condition in asari, specifically affecting their nervous systems.

The condition does not harm the asari, although during mating the Ardat-Yakshi's nervous system completely overpowers and dominates that of her mate's, causing hemorrhaging in the victim's brain, and ultimately death in extreme cases. As a result, the Ardat-Yakshi becomes smarter, stronger, and deadlier after each encounter. Ardat-Yakshi also have the innate ability to dominate the minds of others.

The condition is impossible to identify until the asari reaches maturity, by which time it is too late to correct. When diagnosed, afflicted asari are given a choice: live in isolation or be executed. The asari do this to the Ardat-Yakshi because it is an addictive condition; they feel compelled to mate, and the compulsion grows stronger each time they succeed.

Ardat-Yakshi are a disgrace to the asari culture. It is suspected that this condition is what lies at the root of the asari prejudice against purebloods. Samara, a pureblood herself, states that the condition is as old as the asari species, and that it appears only among purebloods.

Ardat-Yakshi contained in monasteries turn their energies into more productive pursuits. Their products often end up in the galactic market as commodities with reputation, like asari honey marinade, or as luxury items, like asari honey mead. Some residents are allowed strictly supervised visitation rights to Thessia, on the belief they have the right to know their homeworld. However, if an Ardat-Yakshi is judged unsuitable to leave the monastery, this offer is not extended.

Falere, Rila, and Morinth, all daughters of Samara, have the lethal version of this condition. Morinth chose to embrace her condition, while Falere and Rila opted for a life of peaceful seclusion. According to Samara, these are the only three living Ardat-Yakshi. However, less severe cases are supposedly more common, including up to 1% of the population.

While it is not known how much the Ardat-Yakshi's strength increases after each mating, or whether the victim makes any difference, Morinth's continuous use of her condition over centuries allowed her to match Samara's power and experience, despite the 500 year difference between them.

If Shepard mates with Morinth, the Commander is struck dead almost immediately, becoming another victim of the condition.

An Ardat-Yakshi monastery on Lesuss comes under attack from the Reapers, the objective being to capture those afflicted by the condition and turn them into Banshees. Asari High Command dispatched several commandos to investigate, but when they failed to report back in High Command implicitly tasks Commander Shepard to follow up. Samara, if she survived the suicide mission, also travels to the monastery to check on her daughters Rila and Falere.

If Shepard investigates, the monastery's inhabitants are overrun and the place is later cleansed of the Reaper threat. Falere is left either the last known Ardat-Yakshi in the ruined monastery, or executed as well for being a risk.

Retrieved from "https://masseffect.fandom.com/wiki/Ardat-Yakshi?oldid=519279"
Community content is available under CC-BY-SA unless otherwise noted.