Mass Effect 2
Mass Effect: Inquisition
Mass Effect 3
“You'll have to make him scream a little. He's not going to tell you everything just 'cause you ask.”

Armando-Owen Bailey is a human C-Sec officer stationed in the Zakera Ward of the Citadel in 2185 and early 2186.

Bailey started out as a regular C-Sec officer, neglected in the largely turian-dominated force until the geth assault on the Citadel. With C-Sec losing so many personnel in the attack, the organisation was forced to start hiring and promoting more humans, including Bailey.

Bailey is a no-nonsense officer more interested in results than rulebooks or idealism. He is competent and impartial, if unorthodox. Having previously served with the Alliance Navy, Bailey came to prefer a stationary life; he joined C-Sec in order to remain in one place and spend more time with his family, though he does not seem to have a good relationship with them due to his long absences. He claims that he runs a "rough and tumble precinct", believing that serious crime in Zakera Ward requires much effort to thwart; he likens policing the Wards to policing New York City. Consequently, Bailey is comfortable with beating suspects and accepting bribes, and is only tolerant of formality "until it stops people from doing their jobs". He prefers field work to a desk job and is very wary of politicians, having a low opinion of politics. Though he enjoys life on the Citadel, Bailey misses food from Earth; he especially laments the lack of Sockeye Salmon on the station.

On Shepard's first visit to the Citadel after resurrection, Bailey can rectify identity record errors caused by the fact that Shepard is listed as dead, sparing the Commander several days of bureaucratic run-around with a not-quite-legal alteration of records. If Shepard's status as a Spectre is restored before speaking with Bailey for the first time, his dialog changes to offering his services and willingness to clear out citizens from any area where Shepard is working on a case.

During Garrus' hunt for Sidonis, Bailey points out a criminal known as Fade and expresses frustration and perplexity at Fade's ability to exploit the C-Sec system. He also gives a lead to Shepard and Thane Krios while they are searching for Kolyat. After the completion of Thane's loyalty mission, the Illusive Man expresses interest in recruiting Bailey to Cerberus.

Early in 2186, Bailey is hoping to take a vacation to Earth to visit his child when he is summoned by Councilor Udina. Udina claims that C-Sec has been compromised and is working against the Council. Bailey is ordered to investigate Executor Pallin, who has been seen in Bailey's precinct recently.

Bailey tracks Pallin to an office building and finds two dead C-Sec officers inside, one clutching a datapad displaying Pallin's face. Bailey confronts Pallin, who demands the datapad and calls the accusations against him lies. When Bailey tells Pallin to explain himself to the officers who will arrest him, Pallin snaps and attacks Bailey. Pallin is killed and Bailey takes a wound to the shoulder.

Later, Bailey tells Udina of his misgivings about Pallin; Pallin was surprised about the charges against him and was also acting strangely. Udina dismisses this as the behavior of a guilty man, then promotes Bailey to Commander, telling him that his vacation will have to wait. Bailey is left saddened that he will miss visiting his child. 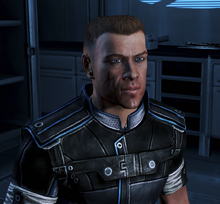 After the events earlier that year, Bailey, with the rank of Commander, is now in-charge of the C-Sec operations of the Citadel Embassies quarters. He personally greets Shepard upon the Commander's return to the Citadel to petition the Council's aid in retaking Earth.

In personal conversations with Shepard, Bailey expresses discontentment with his promoted position. He is more akin of an administrative assistant to the Council than a C-Sec officer. This is seen when Shepard first enters his office and witnesses Bailey attempting to calm down a news reporter demanding to see the Council.

Moreover, Bailey, like many humans on the Citadel, has family left on Earth during the initial Reaper invasion. His wife's whereabouts are unknown, and he has not heard from his son and daughter once the comm buoys went down.

Shepard later comes by Bailey's office to request that he release Jona Sederis, the leader of Eclipse. Aria T'Loak secretly leaned on the Council beforehand, but Bailey is desperately trying to stall, fearing what would happen if a murderous psychopath like Sederis were to be released. Shepard can either use Spectre authority to have her released or find another solution to committing Eclipse to the war effort.

When Cerberus launches an unexpected assault on the Citadel, Bailey is wounded attempting to retake C-Sec Headquarters. Luckily, Shepard arrives and dispatches Bailey's attackers. Bailey then gains access to headquarters and sets up a backup network so his fellow C-Sec officers can plan a counterattack. He then discovers a message from the salarian councilor, who was suppose to be meet with the executor, warning that someone on the Citadel has betrayed them to Cerberus. Bailey aids Shepard in beating Kai Leng to the Council after having learned that Udina is the traitor. Bailey personally makes his way to Shepard's position, forcing Leng to flee; Bailey guesses that Leng figured that Udina's plan would fail. Following the coup, if Shepard questions Bailey if he ever suspected Udina trying to murder the Council, Bailey admits Udina always did rub him the wrong way. Bailey feels like Udina made him for an idiot and he proved Udina right, but Shepard cheers Bailey up by saying that Udina's dead and Bailey is still alive. Bailey thanks Shepard for saving him, saying if Shepard hadn't shown up, both Udina and Cerberus would have been dancing on his grave.

If the genophage cure is sabotaged by Shepard with Wrex as the krogan leader, Wrex confronts Shepard in the Normandy SR-2 docking bay and attempts to kill them. Bailey arrives with a security detail and assists Shepard in taking Wrex down. After Wrex is dead, Bailey contacts the morgue and informs them about the corpse, suggesting that the body is too heavy and needs to be spaced.

If Shepard chooses to host a memorial in honor of Thane's sacrifice, Bailey will be in silent attendance.