Edit
watch 02:13
'Mass Effect' Lore: Armor
Do you like this video?
Play Sound 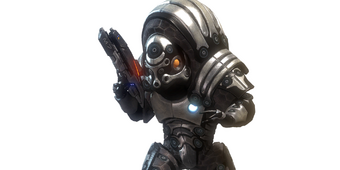 Armor is a protective body covering intended to prevent injury in combat. Armor is usually customized for the species of the wearer.

Turians, krogan, quarians and humans all have specific types of armor; asari use human armor. There are, however, three general armor categories. These rate armor based on the protection it provides. Armor can be customised with upgrades to give better shields or health regeneration, improve cooldown times for tech abilities, or protect against melee attacks depending on individual preference. All armor of levels I-VI have one upgrade slot and all armors of level VII and above have two upgrade slots.

Armor can be alternatively termed as combat hardsuit (or combat hard-suit). Aside from allowing its wearer to survive in environments like outer space, it is also reinforced with sheets of ceramic plating on non-flexible parts of the body. Each set of armor, regardless of its weight, has a kinetic barrier generator and an onboard computer that can give readouts on the environment, liaise with terminals to download data, and check local wildlife against the xenobiology database.

Light armor offers a basic level of protection from enemy attacks and minimizes the movement penalties that affect weapon accuracy. All classes have the ability to use light armor from the start. Adept, Engineer, and Quarian Machinist classes will always be limited to light armor but can increase the effectiveness of armor with the Basic Armor talent. The Asari Scientist and Sentinel classes are limited to light armor and have no talents to improve armor use. Infiltrator, Vanguard, and Turian Agent classes can only use light armor unless they have invested enough points in Tactical Armor to unlock Medium Armor.

Medium armor offers an increased level of protection, but also increases the movement penalties that affect weapon accuracy. The Soldier and Krogan Battlemaster classes have the ability to use medium armor from the start and will rely on it until they have invested enough points in Combat Armor to use Heavy Armor. The Infiltrator, Vanguard, and Turian Agent classes can use medium armor once they have invested enough points in Tactical Armor to unlock it.

Heavy armor offers the highest level of protection from enemy fire, but also has the highest movement penalties affecting weapon accuracy. The Soldier and Krogan Battlemaster classes are the only ones who can gain access to Heavy Armor, but only after acquiring 7 points in Combat Armor.

Heavy armor usually offers best damage protection and shields, but the most basic models offer very low protection against tech and biotic talents. Heavy armors that offer an acceptable amount of this protection are available only later on and are usually hard to find; heavy armor is rarely seen on non-combatants.

Some armors have certain properties not shown in the inventory screen. Armor manufactured by Devlon Industries provides immunity to environmental hazards on dangerous worlds. Phoenix Armor, made by the Sirta Foundation, regenerates health when worn.

Each armor has also a hidden multiplier that affects all external sources of shielding (Omni-tools' Shield Bonus, Electronics passive buff, Barrier and various Armor Upgrades). This multiplier ranges from 0.84 (making said bonuses weaker than their listed stats) to 2.2. In general higher quality armor tends to have higher multipliers, top choices are: Battlemaster, Berserker, Rage and Phantom (1.6), Colossus (1.7), Predator X (2.0) and - if you're comfortable using PC Tweaks - Hazard and Crisis (2.2).

The best shields (and great armor overall) come from Predator L/M/H Armor, while the highest damage protection comes from Colossus Armor (Kassa Fabrication); both are found at level 7+ versions. The various Geth Armory armors (krogan) and the Phantom (turian), both 7+ versions, along with Mercenary Armor (Ariake Technologies), also have a slight edge over HK.

Generally, the various Hahne-Kedar armors (all models have the same stats), are the best in class of common armor, usually 1-2 levels better than the remaining manufacturers. The only other armor worth looking at is Titan Armor (Rosenkov Materials), which has higher damage protection than HK, but lower shields.

Other manufacturers are usually worse, even if a higher level or weight category, and once you outfit with HK you will probably stick with it until you find a higher level HK or one of the premium armors (Predator X/Colossus or Geth/Phantom/Mercenary).

This glitch results in equipping any armor you have on any character in the party, regardless of restrictions. In the equipment menu, on armor selection, find the armor you wish to equip (greyed out or not). Count from that armor down to the bottom of the list of armor. Press X to enter upgrade selection. Select any upgrade, and hit Y to convert to Omnigel, but almost simultaneously press and hold A, and don't release. Once the prompt to confirm conversion to Omnigel appears, release A and press B. The selection screen will appear different - as if selecting armor, but with upgrades in the selection list, and the Icons describing the selection will appear strange (1 icon, then 3 other repeating icons) if done correctly. Scroll to the bottom of the list of upgrades, then scroll up the number you previously counted down from armors. Equip the 'upgrade', and the armor you previously picked will be equipped instead.

Note: This glitch does not appear to be able to forcibly give any armor with less than 3 upgrade slots, additional slots through upgrade-transferring.

Also note: To be able to select all armors from the list, you need to have an equal or greater number of upgrades to armor.

This glitch requires the armor you want to equip to be at the top of the armor list. To perform it, open the armor upgrade window by clicking on an upgrade, then double-click the equip button rapidly. Inventory management is left as an exercise to the reader, but remember that any new armor is at the top of the list.

Note: On PC the same effect can be achieved via the console. Any armor you give to yourself is equipped on your character, even if it is invalid.

In Mass Effect 2, Commander Shepard starts with the default N7 Armor. The N7 Armor can be customized or swapped out for any of the other armor sets: Blood Dragon Armor, Terminus Assault Armor, Collector Armor, Inferno Armor, Cerberus Assault Armor or Kestrel Armor, which are available as downloadable content. While the bonus stats for the DLC armors are relatively high, only the Kestrel Armor can be customized in the same way as the N7 Armor.

Armor sets for your squadmates are pre-determined in stats and appearance. Alternate appearances can be unlocked by completing the squadmate's loyalty mission, or by downloading an Alternate Appearance Pack DLC.

Commander Shepard's armor can be customized by swapping out pieces of the default N7 Armor for pieces purchased from merchants, or made available as downloadable content, by using the armor locker aboard the Normandy SR-2. Not just augmenting the armor's physical appearance, these pieces also have varying effects on various aspects of Shepard's combat effectiveness. Additionally, the player can further customize the armor's appearance by changing its color, reflectiveness or applying a pattern.

In addition to the many available options for Shepard's armor, the Commander can choose from a selection of casual outfits to wear when armor is not required.

In Mass Effect 3, Commander Shepard starts with the default N7 Armor. The N7 Armor can be customized or swapped out for any of the other armor sets: Blood Dragon Armor, Terminus Assault Armor, Collector Armor, Inferno Armor, Cerberus Armor, N7 Defender Armor or Reckoner Knight Armor. N7 Defender Armor and Reckoner Knight Armor are only available via downloadable content.

Armor sets for your squadmates are pre-determined in stats and appearance. However, unlike Mass Effect 2, squad armor sets in Mass Effect 3 have effects on gameplay in the form of a bonus to the squadmate (e.g. +25% power damage) that varies depending on the set. Note that some armor sets have the same effects, even those available to the same squadmate (e.g. two of Ashley Williams' outfits give the same bonus, +25% weapon damage). New alternate appearances can be acquired through downloadable content. For a full list of armor sets available to squadmates, see the the squadmate guide.

Commander Shepard's armor can be customized by swapping out pieces of the default N7 Armor for pieces purchased from merchants, or made available as downloadable content. Not just augmenting the armor's physical appearance, these pieces also have varying effects on various aspects of Shepard's combat effectiveness. Additionally, the player can further customize the armor's appearance by changing its color, reflectiveness or applying a pattern.

In addition to the many available options for Shepard's armor, the Commander can choose from a selection of casual outfits to wear when armor is not required.

Armor can now be customized with interchangeable items like weapons seen in prior Mass Effect games. These customization items are known as Augmentations and Fusion Mods.

Augmentations are semi-permanent items that are added during crafting of armor pieces.

Fusion Mods work on the principle of Mods for weapons in Mass Effect: Andromeda.