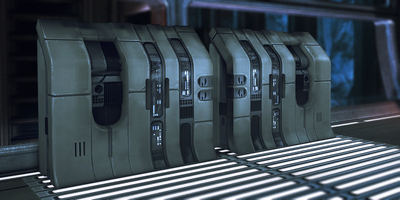 An AI cannot be transmitted across a communication channel or computer network. Without its blue box, an AI is no more than data files. Loading these files into a new blue box will create a new personality, as variations in the quantum hardware and runtime results create unpredictable variations.

The geth serve as a cautionary tale against the dangers of rogue AI, and in Citadel space they are technically illegal. Advocacy groups argue, however, that an AI is a living, conscious entity deserving the same rights as organics. They argue that continued use of the term "artificial" is institutionalized racism on the part of organic life; the term "synthetic" is considered the politically correct alternative.

Artificial intelligence is a key concern for the Citadel races, one that pre-dates the emergence of sentient geth, though the geth are seen as a perfect example of how organic and synthetic life would struggle to co-exist. Tali points out that synthetic races have no use whatsoever for organics—they don't have the same needs or drives as biological creatures, so they have no need to trade resources or information with them. That is why the geth have isolated themselves beyond the Perseus Veil. An AI gives the view from the other side of the fence when it tells Shepard that, from a synthetic point of view, "all organics must destroy or control synthetic life forms".

In 2165, the Alliance facility at Sidon was found to have been conducting illegal AI research; the Alliance faced heavy fines and censure as a result. By 2183, only four corporations have been licensed by the Citadel to develop artificial intelligence for research purposes, one of which is Synthetic Insights, Ltd..

In late 2184 Alec Ryder's artificial intelligence kernel is repeatedly stolen by multiple interested parties. The kernel forms the basis for at least 4 intelligent systems: SAM, SAM-E, the Home Away AI "emulator", and Medea.

The Home Away AI "emulator" is merely the station VI running a simulation of the AI kernel. It is capable of managing some tasks the way an AI would, but crashes if it's overtaxed. Medea is the Quiet Eddy VI merged with the kernel but contaminated with the knowledge of a cybernetic weapons experiment done elsewhere on the facility. It is supposed to be a hybrid between shared-intelligence networks like the geth and bluebox-type intelligences, but instead it becomes homicidal and begins slaughtering organics on sight.

SAM-E is Ryder's experiment into AI transferability. If all went well as intended, SAM would have integrated into SAM-E upon Ryder's death. However, SAM-E had not been adapting properly to his host Cora Harper despite their bonding at a personal level, resulting in the erasure of his personality when a threat to the Hyperion SAM Node forces Ryder to integrate SAM-E back into SAM.

The code theft has been triggered by parties yet unknown that wanted the kernel spread far and wide but only in human hands. At the conclusion of the code theft fiasco, all known implementations of the kernel are safe back in Andromeda Initiative control or vaporized in Medea's case. 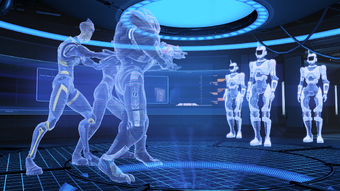 There is a documented event in the Citadel Archives dated 1896 CE, the year the Geth War ended and the quarians were forced into exile, featuring a standoff between three armed C-Sec officers and three unarmed mechs that are housing the last of the AIs on the Citadel. One of the mechs states that the C-Sec termination action is unlawful and asks why the officers continue when their appeal has not been heard. One of the officers orders the mech to be silent, and mentions that the Council will never overturn its own edict. The mech makes one last plea for them to be spared before all three mechs are gunned down.