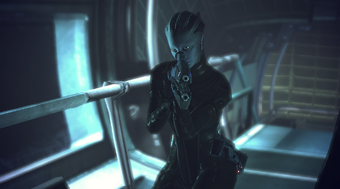 Asari Commandos, another term for asari huntresses, are powerful asari biotics who form the elite of the asari military. Often in the maiden stages of their lives, they usually fight in small groups using guerrilla tactics.

As the asari are considered the most powerful species in contemporary Milky Way times, most of their operations involve fighting other asari: terrorists, cults, rogue Ardat-Yakshi, and Citadel secessionists.

Some asari commandos were among the first to be chosen as Spectres. They may serve as bodyguards to prominent asari, such as Matriarch Benezia. Commandos also carry out mercenary work; Nassana Dantius has Eclipse commandos stationed at her towers. Urdnot Wrex mentions battling a commando called Aleena.

Commandos dress in distinctive brown uniforms and are usually armed with shotguns or assault rifles. They are considered amongst the finest individual warriors in the galaxy, comparable to Krogan Battlemasters.

Huntress activities are typically sealed for 5 millennia, although the commando may choose to share her experiences at her own discretion.

As with many military units, Commandos practice certain combat stances. One classic shooting stance is the Karita, though it isn't for everyone. According to Cora Harper, krogan attempting it would look like a whale trying to dance ballet. According to Nakmor Drack, that seems better than looking like a salarian tied to a ceiling fan.

Retrieved from "https://masseffect.fandom.com/wiki/Asari_Commando?oldid=522212"
Community content is available under CC-BY-SA unless otherwise noted.