The Ascendant is a kett unit. They typically show up as a mini-boss at the end of an infiltration mission, either as a Priority Ops or an optional mission. There are specialized Ascendants called Prefects, such as the Cardinal and The Valiant.

Ascendants can also be found on Firebases across the Heleus Cluster, deployed on the battlefield if initial waves of kett forces fail to neutralize the APEX forces in the area. 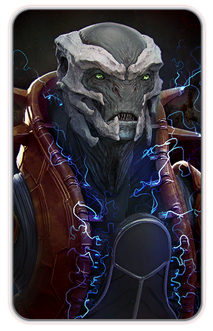 The Ascendant are the highest caste of kett seen on the battlefield and are considered exceptionally dangerous. APEX reports that they are typically only seen when the kett are conducting high-stakes operations, or when a persistent enemy must be eliminated. Element zero cores throughout its armor allow an Ascendant to levitate off the ground, allowing it to command the attention of subordinate kett and rain devastating fire down upon enemies.

The Ascendant appear to have biological control over electromagnetic force. Cell samples gathered at great risk show electrocyte-like formations. It is likely that an Ascendant uses equipment or implants to amplify and control this ability, allowing it to manipulate EM fields that empower its weaponry. If provoked, the Ascendant can unleash a ball-lightning-like attack which conducts electricity to nearby foes, or yank an opponent helplessly off their feet to deliver a barrage of blows.

The Ascendant's conventional attack is a targeted electric shock. If provoked, they can unleash a ball-lightning-like attack which conducts electricity to nearby enemies. This attack ignores cover.

At close range, they will grab a target in a gravity-sphere, then collapse the sphere to crush the target for an insta-kill.

Ascendants are accompanied at all times by their Orb. This small device orbits them and projects an energy force field that protects them from all attacks. Ascendants may only be harmed once their orb is destroyed, but they will quickly generate a new orb after a few seconds.

Retrieved from "https://masseffect.fandom.com/wiki/Ascendant?oldid=515564"
Community content is available under CC-BY-SA unless otherwise noted.