The Athame Doctrine is an asari religion founded on the worship of the goddess Athame. In ancient times, Athame was a goddess of prophecy and fate, and the matriarch of the asari pantheon. Athame's worship gradually changed, becoming the basis for a monotheistic religion in which her maiden, matron, and matriarch aspects oversaw all stages and roles in asari society. When an asari says "by the goddess," they are referring to Athame. Worship of Athame eventually fell out of favor as the asari turned to the siari religion.

Along with her guides Janiri and Lucen, Athame is credited for helping to bring enlightenment to the ancient asari, with Janiri teaching them agricultural practices (including the seasons), Lucen teaching them about the stars, and Athame teaching them mathematics and medicine. The ancient asari also believed that Athame protected their homeworld Thessia from attacks by other, jealous gods.

The Temple of Athame on Thessia still stands as a reminder of the influence that Athame worship had on asari culture. The temple displays various relics attributed to Athame, including murals, busts of Janiri and Lucen, Athame's sword and shield, and fragments of the Athame Codex, an ancient text that explains how asari learned mathematics and agriculture. Other relics not kept at the temple include the Rings of Alune, which were worn by an asari who was believed to have been taught medicine by Athame herself. As an homage to the goddess, three of the planets in the Parnitha system, the asari's home system, are named for Athame, Janiri, and Lucen. 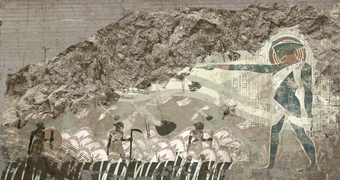 In reality, Athame was not a mythical goddess but a guise crafted by the Protheans. During the height of their empire, the Protheans discovered the asari and judged that they had potential as leaders for the races of the next cycle against the Reapers. They intervened in asari development by creating the myth of a goddess, Athame, who was imparting divine gifts and knowledge through her guides, Janiri and Lucen, who were actually Protheans. Among those "gifts" was the asari's natural ability to develop biotics, which was in reality the product of years of Prothean genetic research and manipulation.

Long after the Protheans departed Thessia to prevent drawing the attention of the Reapers there, the asari continued to advance with the help of a Prothean beacon and archive that had been left behind. The beacon and archive were both housed in the Temple of Athame; the temple proper was built over the archive and the beacon was concealed within a statue of Athame. The existence of the beacon and archive were kept a closely guarded secret by the asari government throughout their history, even after the Citadel Council was formed and it was declared illegal to hide Prothean technology. The information the asari gleaned allowed them to maintain a technological advantage over the rest of the galaxy's races.

Even when the Reapers return to the galaxy in 2186, the asari government continues hiding the existence of the beacon, fearing political repercussion. Only when Thessia itself is attacked by the Reapers does the asari government decide to reveal the existence of the beacon and archive in the hopes that the information stored within could be of use in completing the Crucible. Commander Shepard's arrival at the Temple of Athame reveals not only Athame's true nature, but that the beacon contains a Prothean VI named Vendetta, based on personality imprints of the director of the Prothean Crucible project, including knowledge of the Catalyst, the Crucible's final component.