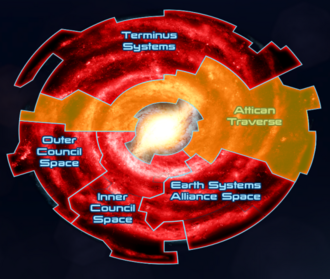 Located near the lawless Terminus Systems, the Attican Traverse is the true frontier of Citadel-controlled space. The area contains many worlds once inhabited by the Protheans, and many mass relays are located throughout the systems of the Traverse. Colonies established in the Traverse are subject to constant raids and attacks from the nearby Terminus Systems, but the presence of multiple worlds both rich in resources and Prothean ruins, continues to draw colonizing interest.

Though the Citadel officially claims the region as its own, the forces of the Terminus Systems have claimed many of the planets and systems to be under their control. Unwilling to engage in an all-out war against the Terminus Systems, the Citadel has adopted a military non-interference policy in the region. However, the Council makes no objection to the Systems Alliance's expansion in the Traverse, because the large Alliance Navy can settle unstable regions without the Council needing to get involved.

Locations in the Attican Traverse