Lieutenant August Bradley is the operational head of the third Eos colonist block, later promoted to mayor upon the establishment of Prodromos. A former Alliance military officer, August is happy to have some independence from direct oversight as the leader of the first successful settlement of the Andromeda Initiative.

August reports only to Foster Addison and is assisted by Majordomo Bell-Scott. The mayor usually loiters around the center of the settlement in front of the southern shuttle landing pad.

The mayor served with Dr. Ramirez in the Alliance, and they kept in touch after August's injury and subsequent retirement. He joined the Initiative because it's a frontier; he didn't think his pension can afford those in the Milky Way.

August left behind a niece on Earth, whom he wasn't on speaking terms with after the passing of his sister.

After Pathfinder Ryder's activation of the Remnant vault on Eos, August leads the third wave of settlers to recolonize the planet, either establishing a military or scientific outpost. As mayor of Prodromos, Bradley has faith in his crew's capabilities to settle Eos and is determined to prepare his people to overcome the challenges that come their way.

The Pathfinder can inspect Prodromos and talk to Bradley immediately after its establishment. If Ryder hasn't returned to the Nexus yet, Bradley advises them to do so instead. Otherwise, he may refer them to his majordomo or other site personnel for other tasks. 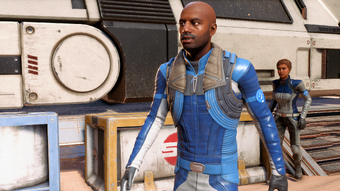 During Ryder's first formal conversation with the mayor, they can advise him to safeguard against overwork or keep logs of their activities. August can assure them he's there to ensure his people's efforts are sustainable in the long run. He takes a dim view of bureaucratic stuffiness though, preferring to log all activities as "Busted ass to feed Initiative" and let the supplies they ship back to the Nexus speak for itself.

The mayor is confident they won't end up like Site 1: Promise or Site 2: Resilience. Bradley respects his predecessors' efforts despite the failed end result, and he also blames poor Nexus leadership for the misfortune of the initial colonization attempts. Nevertheless, Bradley vows to make use of and learn from the mistakes.

Bradley is aware there were staggered evacs during the dissolution of the prior sites, and he welcomes any survivors who want to try again. If Ryder opts to tell him there's no use looking back and they should keep building instead, Bradley counters they should start building for things other than survival.

At the conclusion of their dialogue, August hands a Prodromos flag to the Pathfinder. It touched the soil of the first Initiative outpost in Andromeda, so he wants it displayed in a prominent place on the Nexus.

If asked about his family, August is reluctant to discuss details. "Stay out of people's grief" is the core message given to colonist blocks: every Initiative species (save for perhaps the asari and krogan) woke up from cryostasis knowing all the people they left behind are long dead. Considered the unsaid start of the Initiative, everything else builds from that. People are allowed their own ways to deal with grief: August vents his out expecting his people to stay out of his business, and he stays out of theirs when it's their turn.

Thus, Bradley understands that even the exiles underwent the same thing. He urges the Pathfinder to consider this reality before any shooting starts.

If asked about the Prodromos block, August gives different assessments depending on outpost type. He didn't train with the soldiers Ryder populated the military outpost with, but he gets along with them well enough and deems them a solid base once they open up the land for claims. On the other hand, he thinks his people are an exacting bunch if they operate a scientific outpost, and they'll allow groups with enough start-up resources to stake claims eventually. Either way, he's honored to lead them as long as they need him.

Bradley may admonish the Pathfinder if they're wearing N7 Armor while talking to him. He served with a couple of N7s back in the Milky Way, and he can attest that they earned the right to display the N7 symbol. Ryder reasons they also served in the Alliance, so Bradley flatly "thanks" them for their service. He means exactly that, though he more earnestly thanks them for being Pathfinder.

The Pathfinder ultimately has utilitarian purpose for the armor. If Ryder doesn't care for the N7 symbolism, Bradley surmises as much and thinks he'd be more inclined to argue if the Pathfinder were anyone else. If Ryder has a more diplomatic approach, that they felt it wasn't right to alter the armor, Bradley understands the necessity but emphasizes usage only when there's no other choice. Either way, the armor being from Alec Ryder means a pass for most people, and Bradley's not really saying Ryder should take the armor off.

Bradley messages Ryder about something Hainly Abrams is working on. It leads to the discovery of Advent, another "nation" in Eos who may be amenable for trade, and an Architect responsible for the quakes Prodromos has been experiencing lately.

In the aftermath, the mayor's glad the Pathfinder helped with Hainly's problem and the seismic rumblings have subsided. He expresses concerns that his outpost's land claims scheme may have been upended by the existence of Advent, though he still hopes this new organization would act like neighbors and not competition. All in all, he's ambivalent about Advent itself.

If Dr. Zoe Jean Kennedy and her newborn was sent to Prodromos instead of the Nexus, Bradley mentions hearing a human baby cry in Andromeda for the first time, tangentially recalling he missed the feeling of rain on his face.

August may later contact the Tempest to inform Pathfinder Ryder that an armed alien force is positioning itself to invade Eos. Fearing that the situation could escalate into a war and is meant to provoke one, Bradley maintains radio silence and instigates a brown-out of Prodromos while he awaits Ryder's arrival.

When Ryder shows up, Bradley plays back a recording of an intercepted message that reveals their hidden enemy is attempting to plant beacons in order to target Prodromos. Bradley also expresses his concern that the enemy has been using the raids on Prodromos as a decoy to cover up their tactical buildup in Blackrock Tande. When Ryder's companion, Jaal Ama Darav, recognizes that the voice in the message belongs to an angara, Bradley concludes their enemy are the Roekaar; and that by attacking Prodromos, they are trying to start a war with the Nexus.

Ryder would then go on to defeat the Roekaar plot and send them running off-world. Akksul, the angara who organized the attack, is forced to retreat from Eos, though he threatens to return. Bradley warns him that Prodromos will be ready to defend itself when he does.

In the aftermath, the mayor thanks the Pathfinder for their help, reporting that things are still settling down after the Roekaar "event". He doesn't want to deal with anything like it again.

The mayor may assist Liam Kosta in finding the angara Verand — which leads the Pathfinder into a derelict kett dreadnought run by an angaran pirate named Calot of Talon Wing. August helps Ryder's squad by leading a squadron of shuttles in initiating a power surge on the dreadnought, which subsequently messed with its artificial gravity and also aided in hacking its computer systems.

Ultimately, August helps rescue Verand and several Initiative captives and prepares to take them to Prodromos, unless Ryder decides to detain Verand.

After the battle for Meridian, Ryder can optionally support Bradley as interim ambassador to the Nexus. He's willing to take on the extra responsibilities so long as it's temporary.

If he's not the ambassador, he has opinions on who is. He holds Moshae Sjefa in high regard due to her efforts dispelling mistrust directly affecting his negotiations with Aya.

Bradley praises the Pathfinder for their stunt with Meridian. He claims the sky is different again, having witnessed its clusterwide terraforming effects firsthand. Now that things are going right, his short-term goal is still stabilization and making sure everyone has their start. Long-term, he has plans to retire on a homestead with fences someday.

Retrieved from "https://masseffect.fandom.com/wiki/August_Bradley?oldid=521621"
Community content is available under CC-BY-SA unless otherwise noted.