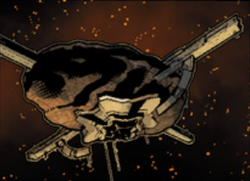 Avernus Station is a Cerberus research base that was constructed beyond the Omega 4 Relay after the events of Mass Effect 2. Its primary purpose is to facilitate the study of Reaper technology.

At some point, a colony of Reaper creatures known as Adjutants broke loose on Avernus Station, overwhelming the personnel. The Adjutants reach the transport ships docked at the station and cross the Omega 4 Relay, arriving at Omega. Some Cerberus operatives manage to survive the initial outbreak on Avernus and flee to the station's exterior, in the hopes that the high levels of cosmic radiation will kill the Adjutants; they are proven wrong, and the Adjutants follow them. They are saved by the timely arrival of the Elbrus, a Cerberus warship commanded by General Oleg Petrovsky. Petrovksy and Aria T'Loak assist the troopers in eliminating the remaining Adjutants and re-securing the station.

Retrieved from "https://masseffect.fandom.com/wiki/Avernus_Station?oldid=459163"
Community content is available under CC-BY-SA unless otherwise noted.