Avina is the information VI for both the Citadel and the Nexus, first encountered by Commander Shepard near the Embassies on the Presidium. Like all VIs it appears as a hologram: Avina takes the form of an asari. It has several terminals around the Presidium, often near points of interest such as the Relay Monument or the Krogan Monument, and can answer any questions Shepard might have, giving guidance and a brief insight into galactic events.

Being a VI, Avina's capacity for discourse is limited; if Shepard asks for Avina's opinion on a subject, or if the Commander's questions get too politically charged, Avina says it hasn't been programmed with the parameters to answer. If Shepard tells Avina about being invited to the Council Chambers, it says that is a rare privilege; it states that it would be jealous, but that is beyond the scope of its programming.

After Saren Arterius launches his attack against the Citadel, Shepard's team returns to the Citadel via the Conduit and can access the Avina terminal near the elevator. Avina gives them a status report on the geth attack and lists the damage on the Presidium. At this point Avina's holographic generator seems to have been badly damaged, though it can still report what happened to the Council, as well as where Saren is headed.

Avina is found on several terminals around the Zakera Ward. Avina will answer questions concerning the current state of the Citadel and the local points of interest found around the terminals. Avina notably states that the Citadel attacks were caused by the geth rather than Sovereign. If Shepard asks about the Reapers, Avina states that it has no information regarding the term.

If Shepard questions some of C-Sec's security measures following the original Council's death, Avina will say that C-Sec officers are coming to detain the Commander and advises them not to resist. 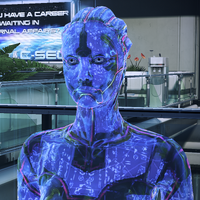 Avina can be found on all levels of the Citadel. It provides information on local shops and features. Avina has different dialogue trees depending on the level of the Citadel Shepard speaks to it. This allows for specific information about the local area. However, Avina does not acknowledge the Purgatory Bar; when asked about Purgatory, it states that 'Purgatory' appears in the religious works of several species.

Avina is also available in the Silversun Strip section of the Citadel, where it can point out the many sights and attractions in the area.

During the party, depending on options chosen, EDI may at one point be heard imitating Avina's voice, much to the amusement of (if he's present) Jacob Taylor who mentions having used Avina to find his way around.

Avina is installed aboard the Nexus and can be accessed on terminals throughout the station. As with its Milky Way incarnation, the virtual intelligence has limited capacity for discourse and can only offer information pertinent to the colonists of the Andromeda Initiative. It is tasked with briefing the Initiative's recruits about the Arks and the Nexus.

If SAM's connection to Pathfinder Ryder is almost crippled by a computer virus from anti-AI activists, Avina's avatar in the Common Area becomes compromised by this anti-AI group, which they use to communicate with Ryder. Now with a blood-red avatar instead of the customary blue, Avina spouts numerous AI horror stories and cautionary tales from the Milky Way's history: Tallaris going rogue, the Hannibal VI going rogue, even the Morning War.