Mass Effect Wiki
Register
Don't have an account?
Sign In
Advertisement
in: Locations, Planets, Planets With Satellites,
and 3 more

Aya is a small and lush tropical world. Its unique position, hidden by both the Scourge and Heleus's black hole, has allowed it to go undetected by the kett.

ALERT: Aya is a sovereign world of the angara. All Initiative personnel must conform to early contact protocols. 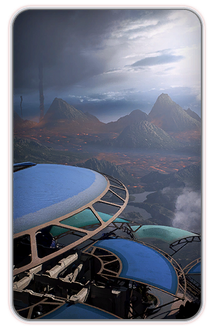 Aya is an anomaly in the Heleus Cluster: a lush planet where a Remnant site appears to be active. It is a sanctuary for the angara, the only known sentient species local to Heleus, and guarded fiercely against outsiders. This is helped by Aya's position relative to Heleus' black hole, whose gravitational lensing effect makes Aya harder to detect. The Scourge also makes the approach to Aya extremely dangerous for untrained pilots. Scans indicate numerous kett wrecks lost in the Scourge nearby, picked clean by angaran salvagers.

Aya is also the headquarters of the Angaran Resistance movement against the kett, whose leaders advise Aya's planetary governor, Paaran Shie. Director Tann has ordered that Aya is not only to be considered sovereign territory, but a military power. While the Tempest and its crew were allowed to visit peacefully, the Nexus is advising extreme caution to other potential visitors, and ordering the distribution of "early contact" guidelines.

With relations warming between the Initiative and the angara, diplomatic overtures continue. The Initiative is opening an embassy on Aya with Paaran Shie's approval, while extending invitations to angaran diplomats and scientists to tour the Nexus. Our Cultural Exchange is beginning several cooperative programs intended to foster better understanding between the various Milky Way species and the angara.

Aya's resources are too limited to support every angara in the cluster. Residence is determined by the Vesaal ("time of change"), a process where citizens are allowed a few years to live on the world followed by giving up their spot to make room for someone else coming in from off-world.

The Vesaal also covers non-angara: Each Initiative personnel allowed long-term stay on the planet has a corresponding Aya citizen who promptly left. Even the planetary governor Paraan Shie isn't exempt, and she must leave if it comes to it.