Barla Von is a volus financial adviser who runs an office in the Financial District of the Presidium. Called a "financial genius" by Captain Anderson, he is adept at moving large sums of money without leaving a paper trail.

Von sells his services to the Citadel elite: diplomats, ambassadors, and even Spectres. Some of his customers understandably question the legality of his services, but Von insists that his operations are strictly within the law. Captain Anderson concurs if asked about it by Commander Shepard, saying that Von "doesn't do anything illegal. He just knows all the loopholes."

Barla Von's real area of expertise, however, is the information trade. As he tells Shepard, "most people think I deal in finance, but my true currency is knowledge." He is an agent for the Shadow Broker, occasionally selling information to the Broker. However, like all agents of the Shadow Broker, Barla Von knows very little about his employer, though he has plenty of theories.

Commander Shepard can meet with Barla Von at the suggestion of Captain Anderson, in an effort to find proof of Saren Arterius' rogue status. It is, however, suggested that any information from Von would probably come at a high cost. After talking with him, Von says he is willing to give the information to Shepard for free because his employer, the Shadow Broker, was betrayed by Saren. Barla Von continues by saying that the Shadow Broker has hired a krogan mercenary to deal with the problem, and directs Shepard to the C-Sec Academy, where the freelancer was 'paying a visit'. 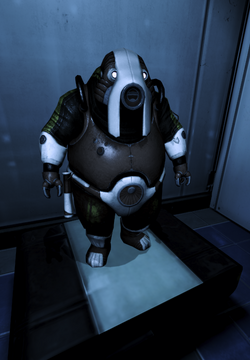 In 2186, Barla Von is at the Presidium Commons next to the Elkoss Combine Arsenal Supplies shop, where he is concluding some business arrangements in light of the ongoing war.

Shepard meets Barla Von at the suggestion of Liara. If Shepard met Barla Von while the Commander was investigating into possible proof of Saren's misdeeds, Barla Von will reference the meeting. On the other hand, if Shepard never met Barla Von, he will say he doesn't believe he's ever had the pleasure of meeting Shepard before. Von expresses surprised admiration that Anderson chose to stay on Earth.

If the Commander asks how Barla Von knew about an Alliance matter, he will reply that the information trade is as important as ever. He recognizes that Shepard needs all the resources they can get, and he makes Shepard an offer. There is a sizable mercenary group that has become trapped in Reaper-controlled territory and is calling for help. Barla Von promises that if Shepard evacuates this mercenary group, the group will join the war effort.

If Shepard asks what's in it for Barla Von since an offer that benefits only the Commander seems too good to be true, the volus will explain that the leader of this mercenary group is also willing to pay a high commission to whoever organizes their rescue. Barla Von also gets paid a lot of money, so everyone wins.

Barla Von is gone from his post after Cerberus' attempt to seize the Citadel. He takes part in the Armax Arsenal Arena challenges at Silversun Strip afterwards, scoring very high.

An audio log aboard the Hyperion reveals that Barla Von helped Alec Ryder contact the Shadow Broker directly for aid on his AI research.