Mass Effect: Foundation
Bates is a Systems Alliance soldier assigned to Unit 212's Dog Squad on Eden Prime. He was captured by Kai Leng in the aftermath of Saren Arterius' geth attack and is currently being forced to divulge what he knew about the matter.

Two days before the attack, Bates was merely one of the grunts enjoying downtime at a bar, observing Sergeant Donkey's interactions with Chief Ashley Williams. A straightforward man, he reckons there's a better chance of Donkey seducing Pennyloafer or Penny hooking up with Ash instead, and approves of hot girl-on-girl when Ash herself reinforces the idea.

The soldiers are soon given a mission to defend a recently-unearthed Prothean Beacon. Dog Squad is ordered to patrol the area between the dig site and the colony, and Bates complains why they're walking when the other three squads took transport. For his trouble Sergeant Donkey assigns him to point duty. 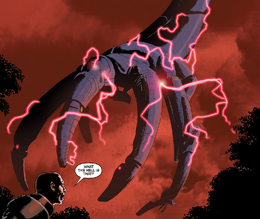 Bates voices his uneasiness the night of the geth attack, causing his watch partner to retort that he always thinks that way. He reasons that their fellows from Bravo Squad should've made contact by then, and the fact they didn't means something is wrong. Later they discover the remains of Bravo Squad below the cliff they were standing on, and Donkey partners him with Ashley for investigation. They find no survivors and Bates becomes distraught at a corpse he once knew as a friend. He pulls himself together when Ash consoles him, and approves of her pep talk upon ascension to squad leader on Donkey's suggestion.

Dog Squad prematurely engages the geth on the mission site at dawn, and Bates participates in laying down diversionary fire. The tactic doesn't work for long and Dog Squad is slaughtered one by one. Bates witnesses a gigantic ominous-looking starship in the distance, and promptly disappears when he and Ashley are the only survivors of the squad. Terrified at the speed and numbers of the geth and the fact Ashley doesn't seem to know when to back down, he refuses to answer the Gunnery Chief's calls for support and crawls away from the battlefield in the chaos, out of his depth and scared for his life.

Bates assures Leng he has told him everything he knew the day after the geth attack, and Leng decides to end his life by making it look like he died with the rest of his squad.

Retrieved from "https://masseffect.fandom.com/wiki/Bates?oldid=479742"
Community content is available under CC-BY-SA unless otherwise noted.