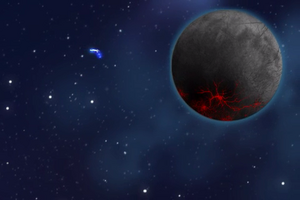 Bekke is a planet in the Nemean Abyss and a key world in Mass Effect Galaxy. A mining colony, likely batarian-controlled, Miranda Lawson sent Jacob Taylor to investigate Bekke after hearing from her sources that a batarian army was gathering there.

When Jacob and his crew arrive on Bekke, the ship immediately comes under gunfire, while Miranda picks up strange readings from the planet. Jacob fights his way into the facility, but begins feeling sick and dizzy.

Jacob soon discovers the prize the batarians are defending, a huge cache of element zero, which has been improperly stored. The closer Jacob gets to the eezo, the worse he feels, but the exposure also temporarily enhances his biotic abilities. After defeating the batarians, Jacob loads the eezo and leaves before its effects can grow any worse.

A batarian bartender on Omega mentions the events on Bekke, citing the deaths of his "family" as his reason for poisoning human customers. If Miranda or Jacob are present during the confrontation, they will comment, defending what took place on Bekke.

Retrieved from "https://masseffect.fandom.com/wiki/Bekke?oldid=465433"
Community content is available under CC-BY-SA unless otherwise noted.