Gianna Parasini, Anoleis' secretary, directs Commander Shepard to the administrator as the person to request a pass to leave Port Hanshan from, in order to pursue the investigation of Matriarch Benezia's presence on the planet.

Unfortunately, Anoleis is an officious bureaucrat who refuses to fully cooperate, despite Shepard's Spectre status. Anoleis is more interested in trying to protect investor interests than assisting Shepard's investigation, and stonewalls any questions about Matriarch Benezia. He refuses to let the team go on their way, citing the inclement weather and the status of Peak 15 as a private facility.

If Shepard receives word of a smuggling operation in Port Hanshan and directly supplies the proof to Anoleis, he rewards the Commander with a pass to leave the port and stern admonishments against causing trouble. If other options are pursued, incriminating details regarding the administrator's dealings may be brought to light.

If Shepard is unsuccessful in obtaining the pass, Parasini tips the Commander to speak to a turian, Lorik Qui'in, who is relaxing in the hotel bar. According to Qui'in, Anoleis has recently gained direct control of lab rents, taking bribes and earning the ire of the local companies. Anoleis is attempting to conceal his actions by accusing Qui'in of corruption, and has paid certain members of Hanshan's Elanus Risk Control security forces under-the-table to ransack Qui'in's offices at Synthetic Insights, where the turian is storing the evidence of Anoleis' corruption on his personal computer.

Shepard can assist Qui'in in getting the evidence on Anoleis, which can be handed over to three different people and influences Anoleis' fate to varying degrees.

If the evidence is simply handed over to Qui'in, Anoleis dismisses Shepard offhand when the Commander comes by his office, citing "issues" he must deal with immediately. 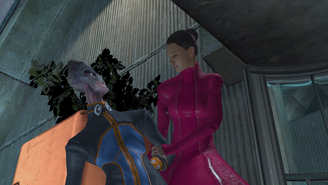 If the evidence is reported to Anoleis, he dismisses it as mere fabrication but offers to take it from Shepard's hands, claiming it would help his investigation into Qui'in's "corruption". In return, he promises to arrange access to Benezia along with a hefty credit payout accorded to "private investigators".

If Qui'in is convinced to testify against Anoleis, which helps Parasini in her investigation as an undercover agent of Noveria Internal Affairs and exposing Anoleis' corruption in the process, Anoleis indignantly protests his situation while being hauled away by Parasini. Prior to getting caught, Anoleis proved himself to be a competent crook, leaving no records of his deeds other than Qui'in's testimony and files. Parasini takes the evidence for safekeeping.

If Shepard exposes Parasini as an internal affairs agent, Anoleis requests the Commander to wait outside his office while he summons her. They both kill each other in a brief shootout. When Shepard takes the pass from Anoleis' body, it prompts a response from authorities led by Maeko Matsuo.

If Gianna Parasini survives Shepard's dealings on Noveria, she is found on Illium pursuing another internal affairs case. If the Commander helped her arrest Anoleis, she reveals in conversation that the former administrator is now serving time in a white-collar prison. If not, then she reveals he was fired over an incident with an asari tax inspector.

Retrieved from "https://masseffect.fandom.com/wiki/Bel_Anoleis?oldid=521600"
Community content is available under CC-BY-SA unless otherwise noted.