Ben Hislop is a human mercenary who worked with Jack Harper and Eva Coré. Ben fought in the resistance effort against turian forces on occupied Shanxi during the First Contact War.

On a mission to locate the artifact that Desolas was searching for on the planet, the group subdues the rest of Desolas' unit outside a cave where the artifact is hidden. Ben enters the cave with Jack to investigate the artifact while Eva guards the turian soldiers. Ben and Jack encounter strange cyberized turians guarding the artifact and have to fight them off. The artifact emits a powerful wave of energy which knocks Ben out. Desolas and his unit take the humans prisoner, with Desolas ordering Ben's body be taken for careful study. 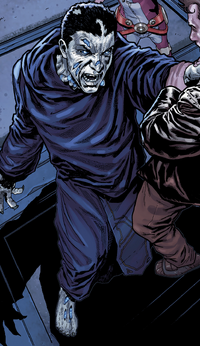 When Harper and Eva pursue Desolas to Illium, they discover that Ben too has fallen victim to the artifact. Though completely synthetic, Ben still retains some semblance of his identity. And he follows orders from Desolas and his brother Saren in a strange alien language to bring the artifact to Palaven. There, Desolas has the artifact brought to a temple where he tries to figure out how to replicate the circumstances that gave Harper enhanced abilities without being reduced to a mindless husk.

While Desolas is starting what he considers to be an "evolution" of the turian race via the artifact en masse, Ben is commanded by it to excavate the lower levels to uncover a second artifact, which would help accelerate the transformation across Palaven and beyond. Realizing the extent of his brother's madness, Saren attempts to contain the "meta-turians". In the midst of the fighting, Eva tries hauling Ben out of the temple, believing that they could attempt to reverse what's been done to him, but Harper seriously doubts it. Therefore, Eva attempts to destroy the artifact, only for it to command Ben to slam her head against a wall.

Coming to his senses, Ben becomes horrified with what he had done. As he cradles Eva's body, he then grows angry and charges at Desolas and rams him into the artifact, just before he could shoot Harper. Saren manages to tear Desolas away from it. The energy released from the artifact instantly kills Ben from prolonged contact with it. Ben's body is later vaporized when Saren orders an orbital bombardment strike on the temple. Harper will later include both Ben and Eva's names in his manifesto as he takes on the persona of the Illusive Man.