Ambassador Dominic Osoba is looking for evidence of his son, lost during a mission on Benning. Find evidence of what happened to his son and return to the ambassador.

Alternative journal entry:
Dog tags for a dead soldier have been recovered from Benning. Return to the Citadel and deliver them to the soldier's spouse or next of kin.

On your second trip to the Citadel, travel to the Embassies and then immediately head left. Ambassador Osoba can be overheard trying to find information about his missing son. Speak to him and you will find out that his son's squadmates returned from Benning without him but will not talk about what happened, and you can offer to help.

If you didn't speak with the ambassador, picking up dog tags during a Hackett-sanctioned operation on Benning will result in this mission's acquisition. It is alternatively labeled Benning: Dog Tags in the journal entry. 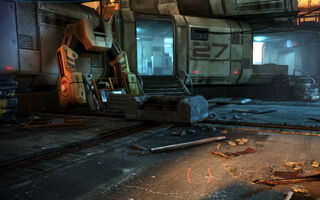 If you missed the dog tags, you can purchase them from the Spectre Requisitions store in the Spectre Office at the Citadel Embassies for 1,000 credits and then present them to Osoba.

Alliance soldier Bilal Osoba, the son of Ambassador Dominic Osoba, is missing in action on Benning and presumed dead. Civilians engaged in black-market trades with occupying Cerberus troops have been able to procure the dog tags of fallen Alliance soldiers, and obtaining proof of Bilal's death would ease his father's mind. To maintain deniability of black-market trafficking, the dog tags should be presented as though the Spectre personally retrieved them from Bilal Osoba's body.

You gain 5 Reputation and 90 experience for completing this mission.

Note: This mission must be completed before launching Priority: Tuchanka as it will be the last opportunity for the player to visit the Citadel before Priority: The Citadel II, after which Ambassador Osoba will no longer be available.

Retrieved from "https://masseffect.fandom.com/wiki/Benning:_Evidence?oldid=447518"
Community content is available under CC-BY-SA unless otherwise noted.