The Berserker is an outlaw unit. These krogan are the heavy muscle behind any pattern of ground assault in the Heleus Cluster, forcing adversaries out of cover from some distance before rushing in for the kill.

Pathfinder Ryder can encounter these Berserkers wherever there are exiles about, such as on Elaaden or Kadara. Other Nexus forces can come across them on Firebases throughout the cluster if the first few waves of outlaw attackers are successfully repelled.


ANALYSIS:
A heavily armored attacker armed with a flak cannon at medium to short range. When enraged, it revels in hand-to-hand and head-to-head melee. 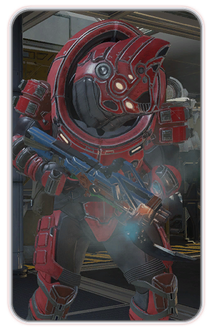 Centuries ago in the Milky Way, krogan berserkers served a key role in the Krogan Rebellions as frontal assault forces that cleared enemy dreadnoughts and besieged fortified positions. The battle cry of the famed Ravank Berserker Company was so distinctive—and psychologically effective—that it was often used in propaganda broadcasts.

Today, krogan who have joined outlaw bands claim to have revived berserker tactics. Wielding powerful flak cannons, they bombard positions to intimidate enemies into breaking their line before closing in. When provoked, a berserker goes into the blood rage that gives them their name, losing higher brain functions and the ability to feel pain while unleashing devastating strikes that can snap an enemy's spine in one blow.

They have access to Flak Cannon and the Ruzad. Berserkers also have two strong types of melee attack: swinging the shotgun like a club and the krogan headbutt.

Berserkers are armored. They can regenerate some of that armor if it drops at a low enough threshold via Berserker Charge, incidentally also boosting their movement speed.

Retrieved from "https://masseffect.fandom.com/wiki/Berserker?oldid=516931"
Community content is available under CC-BY-SA unless otherwise noted.