Binary Helix (BH) is a leader in the fields of genetic engineering and biotechnology. They currently have a significant presence on Noveria, which provides them security from Luddites, organic base-liners, and fundamentalist groups who are opposed to their work. They also do some research in the field of biotic implants. 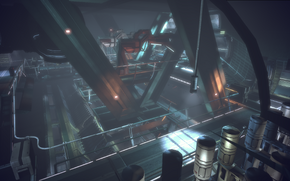 In 2183, BH was renting a lab facility on Peak 15, which was being used to breed the rachni after they found an ancient egg on a derelict ship. BH also began developing a biotoxin called Thoros-B, intended to kill an exotic lifeform (possibly on Saren Arterius' orders), but ordered Dr. Zev Cohen to make it affect more species so they could market it later.

Saren and Matriarch Benezia were key investors in Binary Helix; Benezia was actually an "executive secretary" with the company, and Saren's official executor. Saren's status as an investor allowed him a degree of control over BH's activities; he was able to plant Alestia Iallis at Rift Station in case Commander Shepard made it that far. Using her influence with the company, Benezia intended to groom the reborn rachni to form a large part of Saren's forces.

Before Saren's project comes to fruition, however, the rachni escape containment and ravage the Peak 15 facility, killing many of the scientists and triggering a lockdown. When Shepard arrives at the facility to investigate Benezia's involvement, the Commander rescues the surviving scientists and security guards, then triggers a neutron purge to euthanize the remaining rachni.

As of 2185, the future of Binary Helix is said to be in doubt as a result of the Peak 15 incident.

Mallene Calis was also interested in Binary Helix's activities, hoping to persuade Shepard to help her spy on a BH rep at Port Hanshan named Rafael Vargas. Vargas can talk to Shepard about the military genetic modification packages BH have available, but is quick to insist that Binary Helix obey all the Citadel Council's genetic mod regulations.

Shepard can hear a news story about Binary Helix on the Citadel. BH have recently settled out of court with a group of krogan investors. The krogan wanted Binary Helix to investigate a possible cure for the genophage, but they got angry when the study showed no results and sued the company. Given Saren's connections to Binary Helix, this may be related to the genophage cure that Saren was using on Virmire.

In 2185, Binary Helix joined with the corporations Guanghui Solutions and Sonax Industries to invade the remote world of Garvug, which Binary Helix planned to exploit for eco-engineering research. Binary Helix supplied logistical support staff for the operation. Months into the conflict, the corporatist war effort had apparently stagnated in the face of ongoing insurgent attacks. After criticizing its allies for using chemical weapons, Binary Helix withdrew its forces from Garvug and cut ties with Sonax and Guanghui, who vowed to continue the war. This was later revealed to have been part of a carefully calculated ruse to deceive the insurgency into thinking that they were winning. When Sonax and Guanghui forces finally "withdrew" from the planet, the insurgency's leadership emerged from hiding, only to be wiped out as the corporations, including Binary Helix, returned and launched a surprise attack.

Scientists working in Binary Helix's Nautilus Facility under the ice sheets of Europa, one of Jupiter's moons, discovered microorganisms inside a rock sample. This led to a dispute with the Systems Alliance, with whom Binary Helix had contracted to explore Europa over rights to the microorganisms' genetic material. Binary Helix countered the Alliance's claims by pointing out contract clauses which granted the corporation first claim to any lifeforms created, modified, or discovered on Europa. Weeks later, the Nautilus Facility was flooded and the Alliance called in to rescue the workers. The official explanation was that the station's loss was an accident, but as the flooding destroyed all security systems, the exact cause was left unresolved. Over Binary Helix's protests, the Alliance confiscated data from the station in the event that someone or something inside was responsible for the incident.