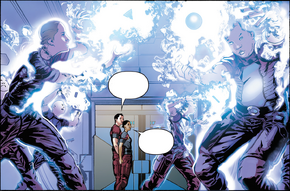 Biotic Acclimation and Temperance Training, or BAaT (pronounced 'baht'), was a programme set up in 2160 to train potential human biotics. Children who had been exposed to element zero and showed signs of biotic potential worth augmenting were sent to Gagarin Station (Jump Zero) by a company called Conatix Industries for training, with support from the Alliance.

Most of the children sent to Jump Zero were teenagers, who nicknamed the programme 'Brain Camp'. Anxious for non-interference, the authorities made a concerted effort to separate the teenagers from their families, by convincing them that biotic abilities—and therefore their own children—were dangerous. Aboard a space station in the middle of nowhere with no contact from home, the teenagers grew into close circles of friends who worked, trained and hung out together.

Officially, BAaT's function was "an evaluation of [their] abilities so an understanding of biotics could be compiled." However, the central problem with BAaT was that at the time, humans knew virtually nothing about biotics, and thus had no idea how to train the teenagers to use their talents. As Kaidan Alenko puts it, "Forget teaching the kids to move stuff, they had enough trouble making sure they didn't break their own limbs."

Eventually, Conatix became frustrated with BAaT's slow progress and began searching for experts to speed things along. However, to avoid making humans look weak, they decided not to ask help from the Citadel. Instead, in 2166, the company quietly hired several biotic turian mercenaries, the most notable of whom was Commander Vyrnnus.

Unfortunately, Vyrnnus was not a particularly good teacher. Though he did help BAaT progress faster, he was also brutal with the trainees, using hunger and thirst as training "incentives". Several of the students at BAaT snapped under his regime; a few of them died, either from accidents during training or from the strain. Finally when Vyrnnus deliberately injured a trainee named Rahna, he suffered a broken neck in the ensuing melee and died. Partly because of the diplomatic issues this caused with the turians, the early BAaT programme was shut down in 2169 and the records were classified to cover up the Alliance's mistakes.

Human biotic training is now handled by the military and some private firms. Some techniques honed during the original BAaT programme are still in current use.