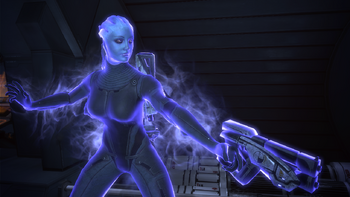 Biotics manipulate mass effect fields using dozens of element zero nodules within their nervous system that react to electric stimuli from the brain. Biotic amplifiers, usually shortened to Biotic Amps or bio-amps, enable biotic individuals to synchronize the nodules so they can form fields large and strong enough for practical use. Amplifiers can also improve a specific biotic discipline or talent.

An implant is a surgically-embedded interface port into which amps are "plugged in". They are also known as "wetware" because of their cybernetic nature. In humans, the implant is usually placed at the base of the skull for convenient access, though the user must be careful to keep it free of contaminants.

Implant ports can fit a variety of amps, and there is a growing market for modifications and add-ons. The finest quality implants and amps are manufactured by asari artisans, but the Systems Alliance's L3 implants, first deployed in 2170 CE, represent a significant step forward for human biotic amp manufacturers. By 2186 CE, enhanced L3 variants as well as more advanced L4 and L5 models have been developed, but are experimental and not widely used.

Below is a list of bio-amp models in Mass Effect. They can be purchased from merchants, obtained during battle, or recovered by hacking storage containers.

The HMBA Basic biotic amp can only be acquired through console commands.

The HMBA Advanced biotic amp can only be acquired through console commands.

The HMBA Master biotic amp can only be acquired through console commands.