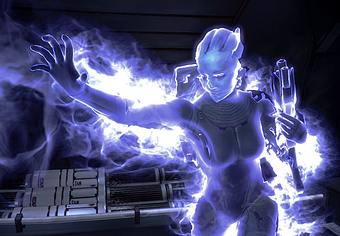 Biotics is the ability of some lifeforms to create mass effect fields using element zero nodules embedded in body tissues. These powers are both accessed and augmented by using bio-amps. Biotic individuals can knock enemies over from a distance, lift them into the air, generate gravitational vortices to tear obstacles or enemies apart, or create protective barriers.

All asari are naturally biotic from birth, though not all choose to develop their abilities. Biotics of other species are individuals who were exposed to dust-form element zero, or colloquially, "eezo", in utero and subsequently developed eezo nodules throughout their nervous systems. These nodules can generate mass effect fields when energized by electrical impulses from the brain.

Eezo exposure is by no means guaranteed to result in biotic ability. On the contrary, most fetuses that are exposed are not affected at all. Others will develop brain tumors or other horrific physical complications. In humans, only about one in ten eezo-exposed infants will develop biotic talents strong and stable enough to merit training, and these abilities are not always permanent. In extremely rare cases, humans who were exposed in utero but did not manifest biotic talents as children can develop them during young adulthood through additional exposure. 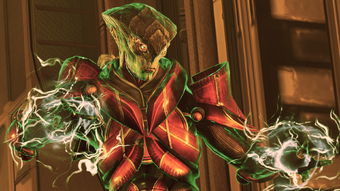 Once identified as having biotic ability, a person might be outfitted with a surgically implanted amplifier around the age of puberty. This amplifier is designed to make their talents strong enough to be useful, and some races have experimented with biotic drugs, such as red sand, to stimulate power instead. Once the implant is installed, its user must then develop conscious control over their nervous system, which is a long, slow, difficult ordeal (except for the asari, who naturally possess a degree of voluntary control). Biofeedback therapy is often used to assist the progression of this process, and once they fulfil their training, a biotic can control their emission of dark energy to generate mass effect fields that move objects, generate protective barriers, or restrain enemies. Biotic abilities are activated using a technique called "physical mnemonics", in which the biotic uses a physical gesture to cause neurons to fire in a certain sequence, sending an electrical charge through their eezo nodules and creating the desired effect. A biotic may enhance certain aspects of his or her biotic abilities by installing implant upgrades called bio-amps.

Biotic abilities fall into three general categories: Telekinesis, the use of mass-lowering fields to lift or hurl objects; Kinetic Fields, mass-raising fields to immobilize objects (in combat, usually enemy projectiles or enemies themselves); and Spatial Distortion, the creation of shifting mass-effect fields which rip apart any objects caught within them.

After a series of starship accidents in the 2150s that dispersed element zero over populated areas, the first human biotics were born, though their abilities were not recognized right away. The first known human biotic was female, dubbed "Subject White", and had a subsequently violent history.

By the time these children were teenagers, the Alliance had made contact with the Citadel and learned of the effects of in-utero eezo exposure. A company called Conatix Industries was founded to track down exposed individuals and develop implants for humans. There are rumours that, after the link between eezo and biotics was discovered, some human colonies were deliberately exposed to dust-form element zero to create more biotic children. 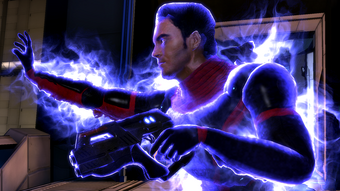 In 2160, Conatix established the BAaT (Biotic Acclimation and Temperance Training) programme on Jump Zero to train its first generation of biotics. Since the Alliance knew very little about this process, it covertly hired turian mercenaries as instructors, but when one of these instructors, Commander Vyrnnus, was killed in an altercation with a student, BAaT was shut down. Records pertaining to the program still remain classified. The Alliance has had considerably greater success with later training projects. Human biotics currently have some oversight from the Alliance Parliamentary Subcommittee for Transhuman Studies.

Most modern human biotics use the Alliance's L3 implant, which are not particularly powerful but are safe to use. However, some older biotics are stuck with L2 implants, which allow abilities to spike higher—Kaidan Alenko's abilities are reportedly comparable to an asari's—but at a significant cost. L2 implants are notorious for causing severe medical complications such as insanity, mental disability, and crippling pain. It is possible to "upgrade" from an L2 to an L3 implant, but the procedure is rarely performed because it carries a very high risk of brain damage. Many L2s feel the Alliance has not provided them with sufficient medical or financial support and want reparations for their suffering. In some cases, extreme physical or psychological stress can cause even normally stable L2s to experience similar health problems.

Human biotics face widespread prejudice and distrust from the rest of their species, mostly due to misconceptions about their abilities (some people wrongly believe that they can read or control minds). Should the missions involving Major Kyle and Chairman Burns both end in all-out bloodshed, the prejudice and distrust may reach the point where governments seek to demand registration of humans with biotic abilities. Certain religious and ideological organizations are also opposed to the concept of biotic modification. Some biotics have been known to abuse their abilities - using them to cheat at roulette, for example, or to pull people's chairs out from beneath them. There have been a few reports of individuals like these being attacked by frightened mobs, and sometimes even killed.

The Alliance military, on the other hand, welcomes biotics with open arms and provides them with massive enlistment incentives. They are now frequently found in the front lines of many ground-based combat units. Because of the massive physical effort required to biologically generate dark energy, biotic soldiers are assigned a large daily calorie ration (4,500 kilocalories per day, compared with the standard soldier's allotment of 3,000) and provided with energy drinks to help them maintain their blood sugar and electrolyte levels. The electrical fields in their bodies mean they are also prone to small static discharges when they touch metal.

All biotics seeking to wield their abilities on a usable level are fitted with an electronic brain implant during puberty. Once the implant is installed, it can only be replaced or altered through extremely dangerous brain surgery, so most individuals keep the same implant their entire lives. Dr. Ellen Ryder is responsible for creating the first human biotic implants. Biotics are classed according to their implant model and the strength of their ability: 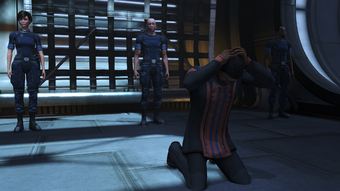 Some unstable human biotics have turned their back on the galactic community for their own reasons. Many L2s, frustrated by extreme abuse endured during their training, chronic and severe health problems caused by their implants, social ostracism, and political indifference, have become alienated from the Alliance and human society in general. This has motivated some radical human biotics to band together and take militant action. Others are drawn to prominent figures who champion their cause or join communes, some of which have devolved into cults. A few of the most extreme fanatics believe biotics are the "evolution of humanity" and that their talents make them innately superior to other humans.

Biotic abilities are of varying rarity and status in other species:

Some non-sapient creatures have been known to develop biotic abilities. The amount of element zero in Thessia's environment has given rise to many species beyond the asari that display biotic abilities. These include both native species such as the manal as well as non-native species such as varren. Biotic abilities in varren make them short-tempered, often leading to their abuse and abandonment. Among these are Eezo, a biotic varren owned by Jack. A similar situation has occurred on Eingana, where eezo contamination from derelict warships caused many native animal species to develop biotic powers. Biotic ability has also been observed in the kirik, an insectoid species from the planet Ekram.

Biotic ability is either exceedingly rare or nonexistent in the Andromeda galaxy, even in the Heleus Cluster where eezo exists in abundance. Neither the angara nor the kett, the two living intelligent species encountered so far in Andromeda, possessed any biotics or knowledge of it prior to the arrival of the Andromeda Initiative. After discovering that asari prisoners could naturally manipulate gravity, the kett occupying the Heleus Cluster made adding biotics into their genome a priority. No kett currently exhibit biotic abilities, but their research notes show they are making progress.

In Mass Effect, biotics are terrifyingly powerful, in some cases able to toss entire roomfuls of enemies in the air with a single ability use, or take even the largest and most dangerous enemy types totally out of a fight. Enemy biotics are almost as threatening to Shepard's squad in return, as biotic users can appear in groups in several missions and are capable of ragdolling the squad and in some cases almost permanently rendering it helpless. When disabled and ragdolled by biotics, the player isn't even able to access the game menu.

In Mass Effect, both enemies, allies, and the player can have biotic resistance that reduces the damage, duration, and effectiveness of biotic abilities. Biotic resistance for the player and NPC squadmates is most commonly provided through armor. Some enemies are immune to the effects of some biotic talents, either due to the talent not being high enough level, or because of a total immunity regardless of level. Advanced models of biotic amps can be equipped by certain classes to further enhance biotic prowess.

In Mass Effect 2 there is an even greater variety of biotic powers including a few that now deal a high amount of direct damage to targets, but their power as a whole has been drastically diminished compared to the original Mass Effect. This is largely because most force-based biotics that can levitate or hurl targets no longer work on enemies with active protection layers such as shields, and at higher difficulties almost every enemy possesses some form of protection. Enemy biotics have also been reduced in power and in prevalence; most enemies that can use biotics are only capable of using them as a way to deal direct damage to Shepard and allies, and they no longer possess the ability to ragdoll or stun the player or squad members for long periods.

Biotics in Mass Effect 3 work much the same way as they did in Mass Effect 2, but the addition of power combos adds a new dimension to their use. There is a greater variety of powers, particularly in multiplayer, and fewer enemies are protected even at the highest difficulties. Enemy biotics are even more rarely encountered than in Mass Effect 2, and are usually confined to very elite enemy types.