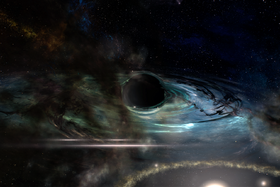 ANALYSIS: Even at this distance, the black hole presents a risk to onboard ship systems. The accretion disk around it is composed of the remains of at least one solar system, destroyed by the black hole's formation and gravitational pull. 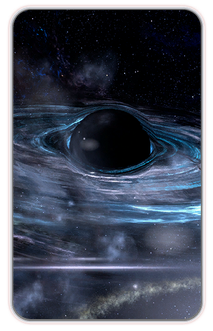 At the center of the Heleus Cluster is a black hole, a huge star that has collapsed into a region of space-time with gravitational effects so powerful that even light cannot escape. This example is believed to be a Kerr black hole approximately 12 stellar masses in size, and appears to have absorbed additional mass from nearby systems. Our scientists believe that the radiation released from the creation of the black hole may explain the abundant element zero found in Heleus.

In the Milky Way, study of black holes was still in its infancy. The forces around the event horizon typically destroy probes before they can transmit their data. This black hole presents a unique opportunity for study even at a remove.

The original asari surveys of Andromeda called the black hole Ardat Hekas, "demon's maw." Initiative charts refer to it as H-012 Ketos, after the mythological sea monster that intended to devour the princess Andromeda.

According to their scientific journals, angaran astronomers called the black hole Haranj (roughly: "the fisher's lure") for the observable effect it has on comets and surrounding systems. The gravitational lensing effect of the black hole has allowed the angara-controlled planet Aya to go largely unnoticed by the kett.

Retrieved from "https://masseffect.fandom.com/wiki/Black_Hole?oldid=511594"
Community content is available under CC-BY-SA unless otherwise noted.