Blasto is a fictional character featured in several films throughout the 2180s and beyond. He is known as the Milky Way's first hanar Spectre. Numerous stories have been devoted to recounting his adventures.

In 2184 prior to his rise in prominence, images of Blasto from the production Requiem for a Reaper! is used to distract Cerberus forces from Rasa's attempt to steal Shepard's clone.

Blasto is introduced in the film Blasto the Jellyfish Stings, a hanar exploitation film advertised on Illium in 2185. Described as having "a lover in every port and a gun in every tentacle" Blasto roams the galaxy meting his violent brand of justice. Despite commercial success, the film has been the subject of criticism from anti-defamation groups who object to the use of the term "jellyfish", which many hanar view as an ethnic slur.

In 2186 Blasto returns in Blasto 6: Partners in Crime, a film advertised in the Citadel's Presidium Commons and involving the hanar's investigation of the vorcha ambassador with his new elcor partner, Bubin[2].

The movie is marketed as a family film, complete with special combo toy packs for the kids. It proves to be wildly successful, breaking opening-week box-office records during the Reaper war. Its producer, Zhanmari Erinaceus, pledges part of the movie's proceeds to the Citadel's military defense fund.

Blasto gets into a spat with his stressed-out volus Chief for failing to bring back some vorcha suspects alive for questioning and blowing up half a level of the Zakera Ward in the process. The chief stresses that ever since eezo was found in the vorcha homeworld the Council has been trying to make nice, with the race getting "diplomatic immunity". Having had to talk his superiors down from suspending Blasto and suffering a pulmonary ulcer from dealing with the Spectre's mess, the Chief assigns Blasto a partner from C-Sec, Bubin, warning that the hanar will have to work with the elcor in a joint operation under penalty of Spectre status revocation. 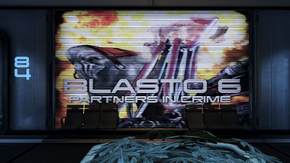 Bubin, a gruff veteran just three solar days from retirement, initially butts heads with Blasto, with both trying to push their work philosophies over the other: Bubin, with his by-the-book approach, and Blasto, with his decidedly loose cannon antics. The vorcha ambassador's shuttle whizzes past them, and the duo hop on to Bubin's mate's car intending to follow, with the elcor complaining it has just been paid and Blasto replying that hopefully it's insured.

Blasto and his gruff partner Bubin manage to corner the vorcha, interrogating him. Blasto manhandles the vorcha despite his cries of "diplomatic immunity". Bubin reacts badassfully, stating concern for Blasto's violent actions, but the hanar reasons the vorcha will be fine owing to his regenerative properties. Blasto threatens the vorcha with incendiary ammunition, stating he has forgotten whether his pistol has it equipped or not, when the latter refuses to talk. Bubin badassfully chimes in that the vorcha better talk because the elcor can't hold the Spectre back. The vorcha caves in, yelling something about "guarding boss at consort". Blasto knocks the vorcha out, and Bubin remarks he's out of control. Blasto retorts that Bubin may wish to check his blood pressure levels as high blood is unhealthy for species like his. Moving on, Bubin replies that he knows someone at the Consort's office. Blasto gets in one final jab; suspicions about his elcor partner's "deviant mating fetishes," when Bubin decides he's had enough and charges Blasto with paying for Bubin's mate's apparently-damaged car.

An attractive elcor named Honey coquettishly welcomes the duo at the Consort's suites, and Blasto is immediately smitten with her. Bubin takes offense at that, badassfully informing the Spectre that Honey is his sister. The attraction is mutual as Honey asks her brother for the handsome jellyfish's name, and Blasto replies instead, claiming he's training Bubin in "proper legal procedure." Bubin seriously reiterates his objection at his partner and his sister's mutual attraction, and with that they enter the suites.

Blasto confronts the vorcha in the consort's suites, claiming to mistake him for "krogan defecation." The vorcha threatens to relieve the hanar of his badge, but Bubin badassfully interjects that the badge is the only thing keeping Blasto from killing the vorcha where he stands. The vorcha threatens that he'll be sorry, but Blasto is unfazed, trashtalking the vorcha in return. Later, Bubin asks his partner about what was actually accomplished in the faceoff, and Blasto replies there are two: one, that the vorcha knows it is being followed, and two, that Bubin still has a "supportive endoskeleton."

Bubin catches Blasto sleeping with his sister, and this proves to be one time too many, badassfully challenging the Spectre to a fight outside. Honey coquettishly pleads with her brother not to hurt Blasto, and Blasto promises not to hurt her brother instead. The C-Sec veteran and the hanar Spectre have a little heart-to-heart, and while Bubin concedes Blasto is one of the best cops he's worked with, aside from the Spectre's relationship with his sister he can't work with a partner who doesn't respect him. Blasto states that he does respect his partner, but he thinks the elcor cares more about protocol than stopping the vorcha. They are about to debate their differing philosophies again when the vorcha villains show up, packing guns. 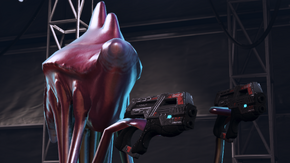 Bubin is apparently injured in the firefight, and while feeling his life ebbing away tries to persuade Blasto to get the vorcha "by the book." Blasto doesn't accept this, stating his elcor partner is too aesthetically displeasing to die. Bubin continues to plead with his partner to the point where his translator gives up and just says "translator error: obstruction in airway." Blasto wails a big no at this, and sets off with vengeance in his heart.

Meanwhile, it's revealed that Honey is under the employ of the vorcha mastermind, but she coquettishly argues that they didn't say anything about attacking Bubin. The vorcha, about to pay her for her services, changes his mind into having her killed instead. Blasto breaks into a window, having deduced that Honey was helping the villains all along and had followed her into the vorcha's lair. The vorcha throws up the "diplomatic immunity" defense, and Blasto, having accepted the promise to do things "by the book," concedes that the vorcha may only be killed in self-defense. The vorcha brings out a gun, however. Blasto notes that the villain is standing on flammable material, leaving him with no choice but to "enkindle this", and blows the vorcha up.

Honey coquettishly asks Blasto what he's going to do with her in light of her apparent duplicity, but the Spectre decides on "nothing": the villains kidnapped her to get to him, and that's what he saw. He adds that Bubin is still alive, in need of blood from a family member to survive, though indicted criminals cannot make tissue donations. Honey is surprised by the information and is grateful for Blasto breaking the rules for her. Blasto rhetorically remarks to his polyp that he's never been concerned with the rules.

Blasto converses with a revived Bubin, reminding his partner that he doesn't get to sleep on the job as his retirement isn't for another two days. Blasto's Chief joins in, delivering news about the vorcha embassy burning down, and further stressed out by the fact the turian councilor is "up [his] cloaca" over the event. Luckily, Honey can testify that the Spectre killed the vorcha in self-defense, and Chief just piles a ton of paperwork on the Spectre. Blasto shifts it to Bubin instead, citing his partner is restricted to desk duty for health reasons. Bubin nearly makes his objection clear with an expletive cut short. 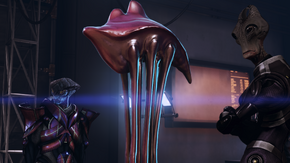 After the Normandy's hijacking, Javik informs Commander Shepard that he has been invited to star in a vid, which turns out to be Blasto 7: Blasto Goes to War!. The salarian director introduces the cast, including the vorcha, salarian and volus Council members, and Blasto. Upon realization of Shepard and Javik's involvement, the actor playing Blasto insists that he does not share top billing, but is convinced by the director and Javik otherwise.

In the film the Council gives Blasto, Shepard and Javik the mission of stopping the Reapers. It soon becomes apparent that in the vids, Blasto is considered the hero of the Citadel and Shepard can take issue with that portrayal or play along. Javik is a bit more disruptive, even going so far as to threaten the salarian Councillor and Blasto. The director soon cuts to a new scene, where Sovereign's half-brother Sluggard attacks, seeking revenge. The vorcha Councillor is revealed to be indoctrinated and threatens the heroes. While Shepard and Blasto can argue who gets to shoot, Javik decides that enough is enough and strikes the vorcha actor with a biotic attack, knocking him off his feet. As Javik and Shepard leave disappointed, the director is overheard calling for a new vorcha actor so they can start work on Blasto 8: Blasto Cures the Genophage!. 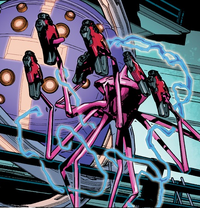 After three Spectres pursuing the mad krogan scientist Kronus turn up dead, Blasto is tasked with picking up the trail. Partnered with the asari actress and Spectre Cerulean Star, Blasto travels to Virmire, where Kronus has built his hideout. There, Blasto and Cerulean Star learn that Kronus has built a machine that can freeze time and plans to take over the galaxy.

Blasto confronts Kronus, but the krogan uses his device to freeze Blasto in time. Cerulean Star comes to the rescue, however, and forces Kronus to un-freeze Blasto at gunpoint. The krogan then activates the base's self-destruct sequence and makes his getaway, but is knocked over a railing to his death by an explosion. Blasto and Cerulean Star escape the base, and Blasto admits that the asari is a good partner.

There appears to be an eighth Blasto movie known to passengers of the ark Keelah Si'yah. Sleepwalker member Anax Therion has watched Blasto 8: The Jellyfish Always Stings Twice either before departure from the Milky Way at the start of the Reaper war in 2186 or during one of the maintenance lulls in the intervening centuries, meaning the film has been produced and completed at some point prior to her most recent reawakening 567 years after launch.

Blasto is one of the cultural artifacts imported by Milky Way settlers to the Andromeda Galaxy. Cereal boxes labeled "Blast-Ohs" can be seen on Andromeda Initiative settlements around the Heleus Cluster. Pathfinder Ryder's athletic outfit prominently features the gunslinging jellyfish. Keeping up with current events, people found the time and resources to continue the Blasto film franchise, as evidenced by the existence of the 3D holo Blasto vs. the Scourge.

The Andromeda colonists also produced an alternate 8th film in Blasto 8: The Biotic Awakens. It is somehow used as the display image for OSDs of the turian movie Last of the Legion.