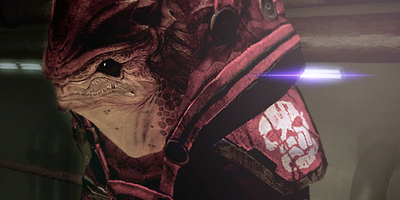 The Blood Pack are a mercenary group primarily composed of krogan troops and vorcha cannon fodder. They prefer simple and brutish solutions to conflicts that come their way: beating enemies into submission.

Originally a small Terminus Systems vorcha gang, the Blood Pack was transformed into a mercenary legion by visionary Krogan Battlemaster Ganar Wrang. Exiled for striking a female in anger, Wrang obsessed over reclaiming his lost status.

Leading the vorcha pack as a pirate crew, Wrang cultivated recruits and infamy for a decade before incorporating his fighters as a security company across the Skyllian Verge. His notoriety ensured his initial public offering for investors made him rich beyond most krogan's dreams. Wrang returned triumphantly to his clan, rallying elders, krogan hordes, and their firepower and biotic support toward professional violence in the Terminus Systems.

Banned from Citadel Space, the Blood Pack bribes its way through spaceports into armed conflicts across the galaxy. Priding themselves for accepting otherwise untouchable contracts, the Blood Pack rejects bodyguarding and security in favor of cases requiring minimal oversight and maximal violence. Blood Pack appears to be, for the most part, made entirely of vorcha and krogan members, though they also use varren as war beasts.

Seeing the potential of the vorcha's individual adaptability, krogan Blood Pack mercenaries often sweep pockets of vorcha, gathering them up and literally beating them into soldiers. Vorcha “trained” by this ordeal are stronger, faster, smarter, and more resilient than other members of the race. Gaining even a few vorcha gives a mercenary band a formidable advantage; each additional vorcha magnifies the gang's combat ferocity exponentially.

The Blood Pack on Omega used to be led by a krogan named Gesark in around 2168, who suffered a humiliating defeat at the hands of Zaeed Massani.

By 2185, the Blood Pack are led by a Krogan Battlemaster named Garm, who claims that the group are the real muscle on Omega. They compete with two other mercenary syndicates, the Blue Suns and Eclipse. They ultimately aspire to dethrone Omega's de facto ruler, Aria T'Loak, and put out a hit on her krogan adviser, Patriarch, as a means of hurting her.

The Blood Pack attempted to seize control of the Gozu district of Omega from the Blue Suns. The Blue Suns run protection rackets, earning credits from the slums' citizens. When the slums are entered, it is commented by the citizens that the Blue Suns kept the district tightly run, and some will even state that they preferred the Suns over the plague for the order they imposed.

When the Collector-spawned plague struck the slums, the Blue Suns non-human members began to succumb and lose their strength, giving the Blood Pack vorcha, who were immune to the plague, an opportunity to seize control. By the time Mordin Solus had created a cure for the plague, the Blood Pack had sabotaged the district's central ventilation system. A fireteam led by Commander Shepard secured the facility, distributing the cure and forestalling the Blood Pack's plans for dominance. 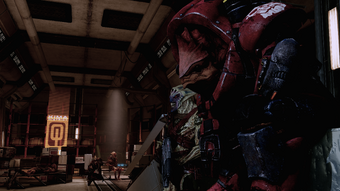 The Blood Pack put aside its rivalry with the Blue Suns and Eclipse when their operations were disrupted by the turian vigilante Archangel. Archangel eventually ended up engaging Garm himself in personal combat, each giving the other the toughest fight of their lives, though Archangel was forced to flee as Garm's men arrived on the scene.

Eventually, the combined might of all three gangs resulted in the deaths of Archangel's teammates, forcing Archangel to hole up in an abandoned apartment building. Garm gained access to Archangel's hideout via a series of secret underground passages, determined to kill the turian himself. However, Garm was killed in the ensuing battle, due to the timely arrival of Commander Shepard.

A Blood Pack crew led by the Krogan Battlemaster Kureck was hired by a human named Aresh to provide security for his plan to restart the Teltin Facility. Aresh had promised them lucrative salvage opportunities in exchange for helping him, but Kureck became frustrated when they found nothing of value.

If Shepard and Jack arrive at the facility in an attempt to destroy it, Kureck and his crew try to attack them, only to pay with their lives.

On the krogan homeworld, some Blood Pack serve as enforcers for Chief Weyrloc Guld, who is seeking to cure the genophage in order to build a new krogan empire with himself as absolute ruler. He appears to have kidnapped a salarian scientist, Maelon, to assist him in this task, resulting in a series of cruel experiments. If Shepard and Mordin mount a rescue operation, Guld and his Blood Pack guards are killed in the ensuing skirmish.

A Blood Pack recruiter is also seen in the Urdnot Camp, viewing non-krogan with contempt and refusing to deal with them. If Grunt takes his Rite of Passage, the recruiter takes notice and lets him know of a job offer - details only in Shepard's absence.

Though the Blood Pack are technically illegal on the Citadel, one of them works as a bodyguard for turian politician Joram Talid, and is seen meeting with other members of the group.

The Blood Pack set up a mining operation on Tarith run by the krogan Salamul. The operation is hampered by the vorcha miners getting lost in the planet's chlorine fog and devoured by native klixen. Salamul requests additional miners from offworld using a communications relay, but cannot get any due to complications in other Blood Pack operations.

The Blood Pack base on Zada Ban uses resources mined on Tarith to manufacture weapons, which Cerberus believes is part of the preparations for a large-scale invasion. Kalusk, the base commander, is the recipient of Salamul's procurement requests. 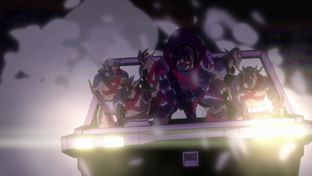 A sizeable force of Blood Pack mercenaries laid siege to the human colony Fehl Prime in 2183. An army of vorcha, varren and krogan led by Archuk, this gang manages to destroy the colony's kinetic barriers and part of its infrastructure before Alliance forces drop in to intervene.

The initial salvo of air strikes destroys the Blood Pack's vehicles. The mercenaries respond with a barrage of missile fire, and Brood, Archuk's second in command, personally brings down a shuttle. The human survivors rally around a Lieutenant with good leadership skills, and together they proceed to wipe out the mercenaries from the planet.

Two years later during the Collector invasion of Fehl Prime, Brood is revealed to be alive, imprisoned within the colony's underground labs. He dies of treachery much later but not before reconciling with Vega, the Lieutenant who bested the Blood Pack.

In 2186, Aria T'Loak attempts to reunite the Blood Pack with the other two merc groups, the Blue Suns and Eclipse, under her command since they are running amok away from Omega. Due to the Reaper threat, she asks Commander Shepard to assist in gaining the group's allegiance, and in turn, promises the Blood Pack's troops for the Commander's war effort.

Shepard may meet with Aria's contact, Narl, to arrange a trap. The vorcha Blood Pack leader Kreete wanted Shepard's head in exchange for his assistance, however Kreete's subordinate, Gryll, had made a secret deal with Aria. In exchange for taking Kreete out, Gryll submits the gang under Aria's banner, committing 2,000 vorcha to the cause.

Krogan members of the Blood Pack can also be seen during the effort to cure the genophage on Tuchanka.